SINCE THE RELEASE OF the Kimberley Karavan a few years back, the concept of crossover campers has been steadily increasing in popularity. Squeezing all the home comforts of caravans into compact and offroad ready units, crossovers aim to get tourers to the most remote destinations in the best of style. Now, after a decade of fine tuning in the tough South African environment, Imagine has bought its crossover trailer to Australia.

The Comfortvan has been available here for less than a year, and for much of that time it has been undergoing a refit to suit our specific market. Packed with more features than you'd ever imagine could be squeezed into a unit of its size and weight, this is a very interesting trailer that in the context of its market niche represents good value for money.

Built on a seemingly lightweight fully galvanised 80x40mm RHS chassis and C-section drawbar, its designers say that for the past 10 years it hasn't suffered a single failure. It sits on a Vehicle Components independent suspension system.

The brakes are electric or, as in our test unit, override 10in drum. Above the axles are two 85L water tanks. Ours had a DO35 hitch. but it also comes with a Hyland or the new Al-Ko offroad ball coupling.

Uniquely, the trailer has dual jockey wheels, which are fitted to avoid fatal breakages. Also unique is the well made stone guard, which is also a fold-up table inside a foam-lined vinyl bag, which clips into a track across the front of the van.

However, perhaps the most unique aspect of the Comfortvan is its body. It's a fibreglass pod that makes the absolute most of the available space.

Our test unit had two double beds, both mounted on fold-out panels. There is one at the front, supported by a bracket off the drawbar, and one on the onside, supported by a freestanding leg. Both beds are sheltered by tropical roofs, which are supported by lock-in poles.

There is an alternative layout, which has the front double bed and a single bed for a child over a large slide-out 1630L cupboard.

Each bed has three windows and there are coarse mesh screens throughout - including the zip-out windows on the pop-up roof - making the camper light and airy. Midge-proof screens are also available.

The kitchen is on the offside with a pull-out bench under extensive shelf space, with the outer two sections folding out to reveal additional shelving behind. The two-burner stove and fibreglass sink with electric tap are adequate but there is a distinct lack of bench space, which is perhaps why Imagine has included the table in the stone shield.

To the left of the kitchen is a hatch opening to a fridge slide that will handle up to a 90L unit. Our test trailer had a 70L National Luna. There is a zip-up curtain behind to seal the interior from draughts and insects because the fridge slides into the trailer's interior. This means it can also be accessed from inside the camper, though the runners present a significant toe-stubbing and trip hazard.

A fold-up side panel provides shelter for short stops. This panel, as with all the camper's externally opening sections, is double rubber sealed to make it dust-proof.

Entry to the interior is through a door next to the kitchen - there are steps which, when not in use, can be hung on the inside of the door. Immediately inside the door is a zip-fronted linen closet and there's a bathroom nook on the far side.

There is a curtain over the shower area, with a floor seal achieved by a length of chain in the curtain hem that sits in a groove in the floor. Here there is a small hand basin, toilet and mirror, plus storage for toiletries.

Opposite the side bed is a fold-up table and a large mirror, as well as a hatch to the back of the kitchen pantry.

Storage is everywhere, with three small but deep cupboards along the top left and two at floor level, as well as one on the right above a large clothing cupboard accessed via a roll-up door. Under the foot of the side bed is more storage as well as the single 100Ah gel battery, and room for a second.

Lighting consists of fluoro fittings above the front double bed head, the inside mirror, the entry steps and in the shower, with a red tinted unit (to discourage insects) over the kitchen.

On the back of the trailer are two jerry can holders, a small storage rack and two 4.5kg gas cylinders.

Set up can be easily handled by one person, with help only required to feed the main awning into the sail track along the offside. A ground cover is included. Optionally there are walls for the awning that have two large screened windows plus a door. Canvas is military grade 17oz for the awning, 14oz for the bed extensions and 12oz for the pop-top roof.

Aside from the shortage of kitchen bench space, and an abundance of interior clothes-catching hooks, our only other criticism is the inability to completely secure this van. The main and fold-out bed doors are lockable, but the fridge, kitchen hatches and front storage hatch are not.

The Imagine Comfortvan was referred to by one customer as the Swiss Army Knife of trailers due to its optimum use of space and endless features, all in a camper that weighs only 1020kg with a ball weight of just 80kg - both much lighter than most of the opposition - and at a very competitive price of $51,100. And best of all, the Comfortvan has been fine tuned for over a decade in South Africa; it's been tried and tested, and it works. 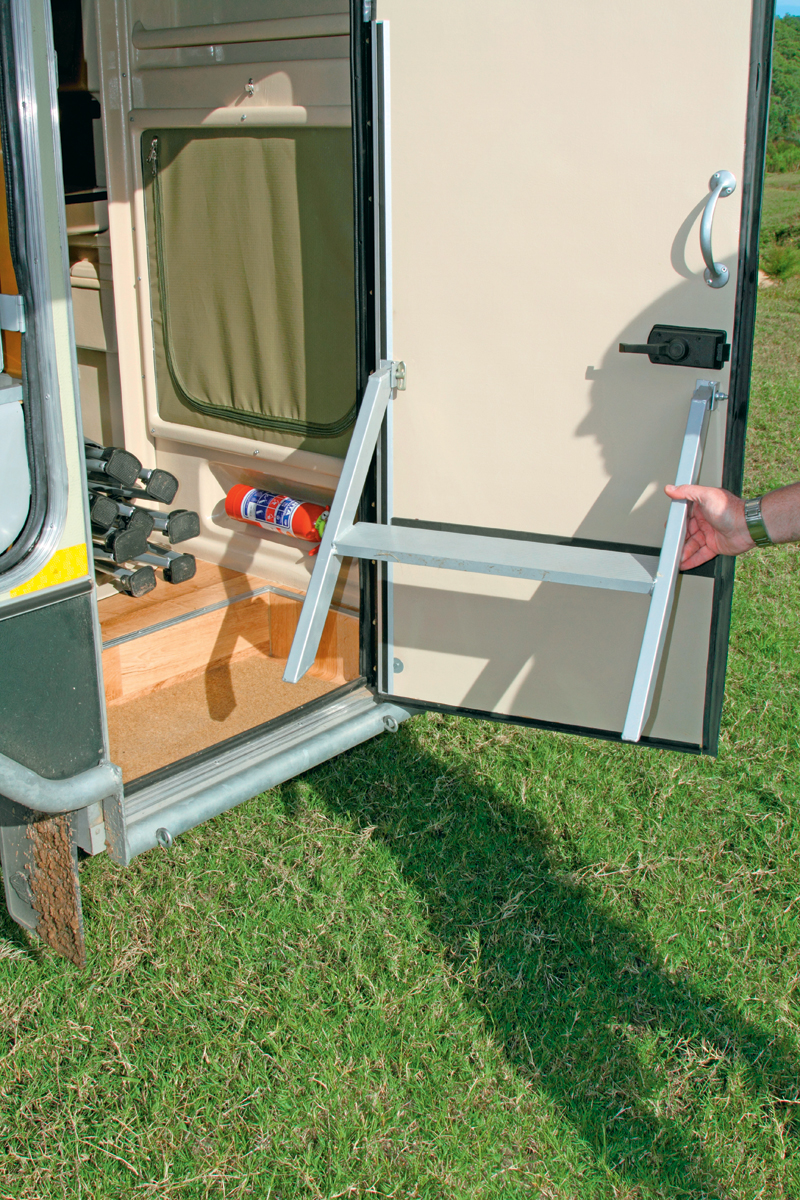