Expertise in working with aluminium has seen Wilmax Aluminium Fabricators produce some impressive trailers over the years. The Adelaide company's latest offering - the Off Road Camp Kitchen - was manufactured according to one customer's need for go anywhere, catering facilities with plenty of space and add-ons to support a range of sporting endeavours.

Bill Drenth, owner of Wilmax and a camper himself, welcomes these challenges. Whatever can be made from aluminium is made from aluminium, ensuring a lightweight unit that will never corrode, and one tough enough to handle the real rough stuff.

When it comes to aluminium, some camper trailer manufacturers avoid it and others embrace it. Bill and Wilmax are in the latter group, and that's why the camper's drawbar, chassis and body are all aluminium. The A-frame is a structural c-channel; the chassis frame heavy wall box section; and the body 3mm treadplate. It looks striking, if somewhat dazzling, in the SA sunshine.

The Off Road Camp Kitchen measures 3.2x1.95m, with a Tare of 620kg and ATM of 1250kg. The running gear consists of Outback six-leaf suspension, 10in electric brakes and massive, 17in Toyota wheels to match one of the owner's tow vehicles (not the Nissan Patrol pictured).

Underneath the body a pair of 65L water tanks are protected against stones, while the top hasn't been forgotten either with a checkerplate roof that handles hundreds of kilos, be they firewood, jerry cans, swags or sports equipment.

You'll notice in our photos that the roof rack has a kayak tied it, and the rear end is able to support a bike rack. The front end features a good-sized boot lined in checkerplate, while a stone guarded lower compartment has space for two spare tyres. Handy for those unpredictable excursions off the beaten track.

As this trailer has been designed to use with a standalone tent, no space is used up for a bed base and sleeping area. This means the kitchen area and storage space are first class. "The owner wants to take the trailer from the camp site on day outings, have all the sports equipment to hand and be able to cook meals easily," explains Bill.

Wilmax met these requirements excellently. A Smev combination three-burner/sink is incorporated into the benchtop, while the shelving has room for crockery, glasses and utensils within easy reach. A large 110L Waeco fridge is ideal for a large group and having a microwave and barbecue on the side of the trailer door provides multiple cooking options.

Wilmax has kept the majority of the weight low in the trailer making it easier to tow, so the trailer's checkerplate compartments house not only the spare wheels, but the 30kg tent through the rear entry, two 4.5kg gas cylinders and an Optima 170 Blue Top battery. The remaining storage in either side of the trailer (accessible via large one-piece gas strut aluminium doors) is vast and well thought out for the owner's equipment and lighter gear like clothes, fishing rods, swags and bedding.

"The roof holds the kayaks and large surfboards, while the front boot is good for tubs to put in wet and sandy beach gear and wetsuits," says Bill. "We've fitted a shower to rinse beach items off as well." 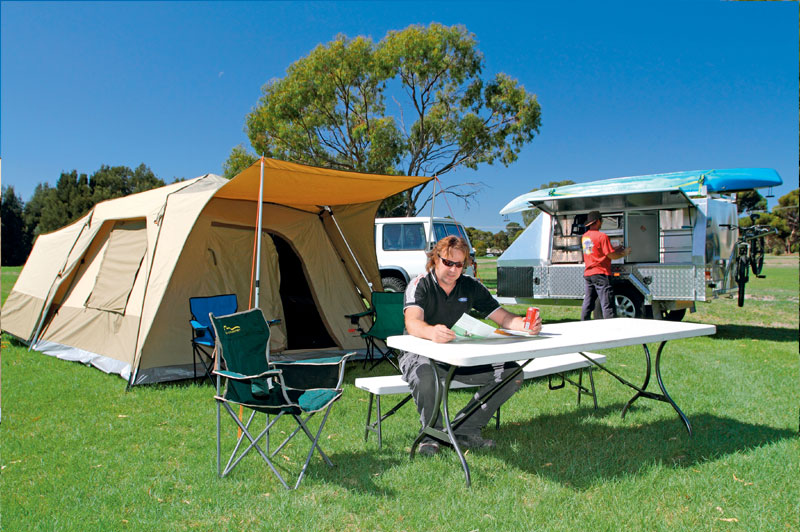 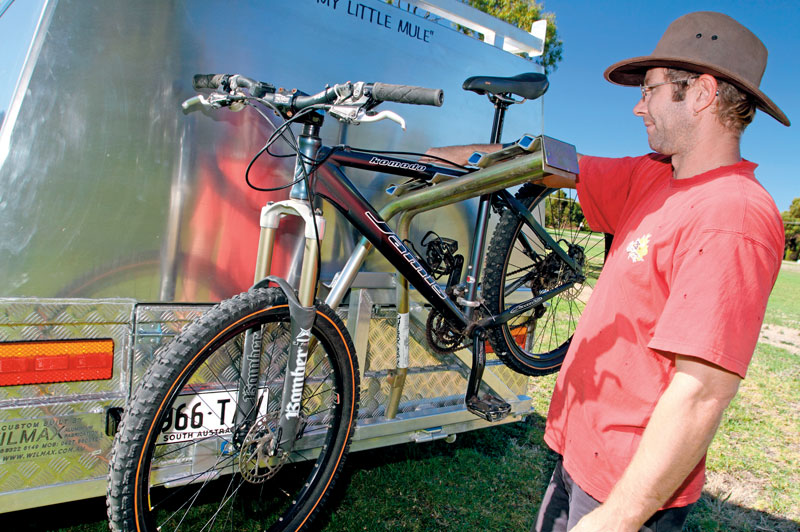 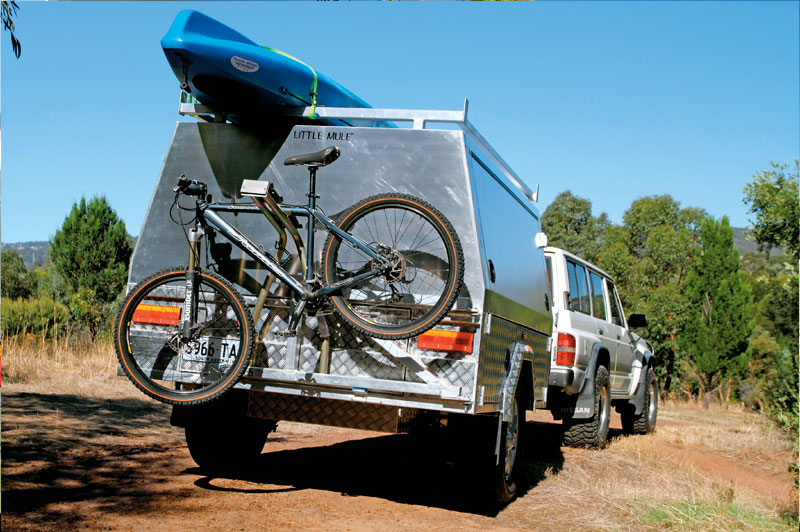 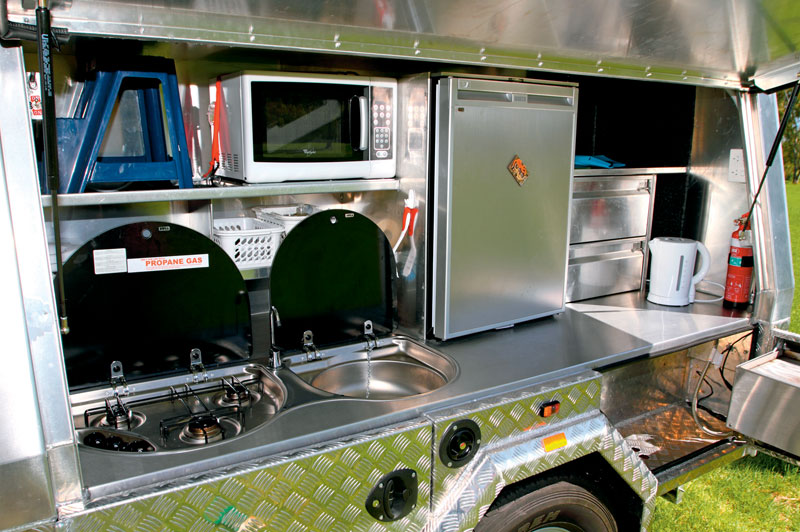 Having a completely separate tent may be undesirable for some travellers, but in this instance it has freed the owners to choose a tent (included in the asking price) that meets their needs. This owner camps out with lots of friends, and the BlackWolf Turbo Plus 300 sleeps eight, allows adults to stand up inside and has an inner section that goes up in only a minute.

Once the camp was all set up, one really could want for little else. A good size table and benches fit in the trailer, and with the tent erected away from the unit, preparing and cooking food feels very unrestricted. Shelter from the sun or rain, if needed, is provided by the trailer's sturdy aluminium door above the kitchen.

"All these things make us a little more expensive," Bill says, "but we never want to sacrifice quality. We pride ourselves on building trailers to be used for serious Outback expeditions."

The Off Road Camp Kitchen is a well thought out trailer built for a clearly defined purpose. Keeping the bedding separate from the trailer increases the overall kitchen area and storage capacity enabling it to sustain many travellers.

The Wilmax Off Road Camp Kitchen at $25,500 on-the-road (tent included) is hardly the cheapest camper trailer available, but its quality is apparent and it meets the needs of its new owner, and such things are worth paying that bit extra for.