While the Trayon Campers Dual Cab brings a lot to the table in terms of camping amenities, it is what it doesn't bring that really makes this camper stand out. At only 370kg tare, this is a light load for any ute.

Manufactured on the Sunshine Coast, not far from my place, Trayon Campers has designed its range of traybacks to be bulletproof. The combination of alloy and fibreglass means that the light weight isn't achieved by limiting its strength. The 10 year structural warranty says more than I can, though, about the build quality of these campers.

What looks like a small camper actually becomes quite large once the roof folds over to become the double bed base, and the canvas tent unfurls. Inside you'll find a small kitchen, dinette and storage cupboards. 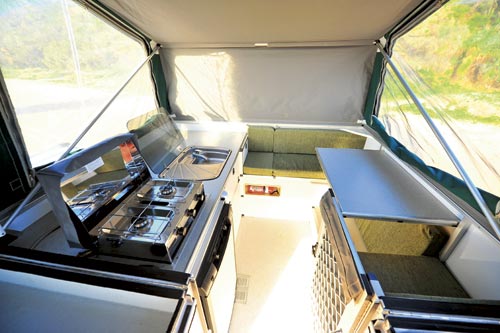 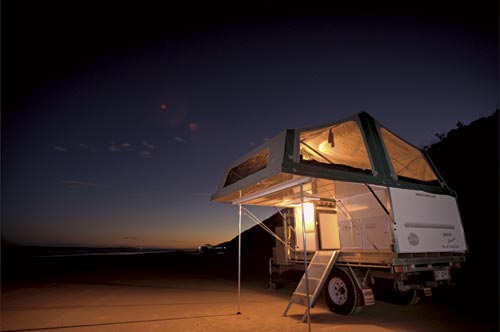 Many people looking at dual cab trayback campers are looking for something for long getaways as a couple, but Trayon's design actually has room to take a kid along as well. The interior dinette converts into a single bed, so it is a pretty versatile unit.

Storage is taken care of by several large cupboards in the kitchen, inside, and a few more small lockers on the outside of the camper that you can get to any time.

The kitchen is designed to suit a variety of users, too. The bench space inside isn't huge, but there is a stainless steel sink with 12V water from the onboard 110L tank (with water gauge). A Lido Junior is provided for cooking inside, or you can carry it outside if you prefer to cook au naturale.

The dinette has seating for three and a drop down table (which becomes the single bed). There is storage under each of the seats as well. Under the Lido is a Dometic 90L three-way fridge, or you can have an Engel 80L two-way instead.

Hot water is provided by a Truma gas boiler to the kitchen sink and external shower. A Dometic 970 portable chemical toilet is also included, and stored in one of the exterior lockers.

The standard electrical system starts with a 55A deep cycle battery with 7A smart charger. There are twin 12V outlets inside, one outside, and a straight to shore 240V system with two interior and one exterior outlet.

The tent is made from 10.5oz Bradmill canvas, and being up high like this camper is, it catches any breeze around. There are five windows, two with inner plastic, and all of them have midgie-proof mesh.

The Trayon Dual Cab is definitely worth a look if you're worried about carrying too much weight on your dual cab ute tray. This thing is light as a feather without sacrificing most of the home comforts.

You lose a bit of storage going with a dual cab camper, but most people will make that up in the back of the ute cab. The finish on the Trayon is great, and the set up is pretty effortless. Packing it up, once the canvas has been folded a couple of times, is easy too. For those who want to stay a little longer, a full range of annexes and walls is available, but as it is at $28,000, this is a great little tourer that will probably outlast your ute.