You don't have to be a journalist or even a regular reader to see this rig from Designer Vans in Wangaratta, Vic, is different. But in an industry where many people like to stick with the tried and true, it would be a mistake to write it off as something a little too different.

On the inside, it's much the same as many RVs, with standard timber benches, sink, cooktop, etc. Yes, it's compact, but certainly not anything you'd describe as a squeeze. 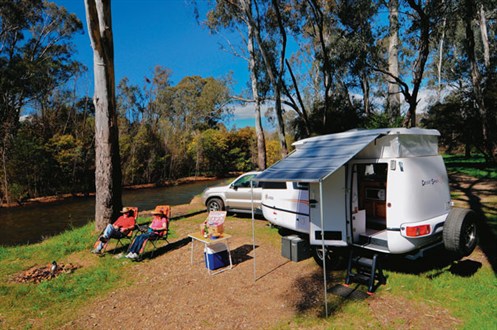 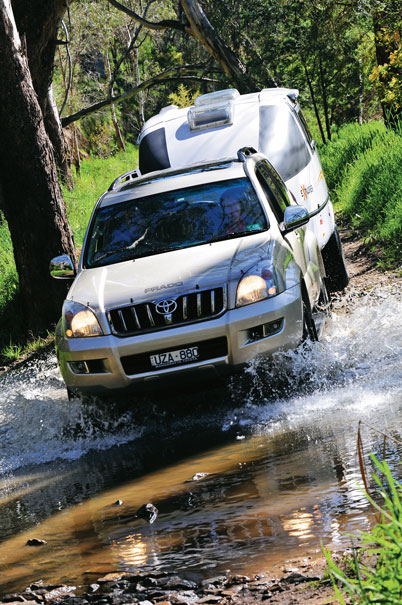 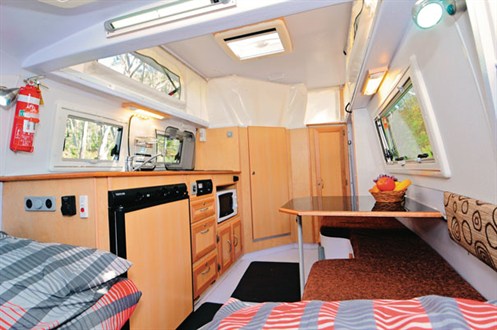 When it was at concept stage - nearly 20 years ago - the eXplorer was not planned for sale in Australia. It was originally designed and built for export to Europe, where light, nimble RVs have traditionally been highly sought after. But much has changed since then.

Today, Australia's fastest-selling car is the Mazda3. Such small cars are now commonplace because Mr Ordinary Australian doesn't necessarily feel compelled to have a thirsty six-cylinder or V8 family-size car to tow a van with.

The Subaru Forester changed the outlook of many Australian dirt road drivers. This was followed by the Toyota RAV4, Honda AWDs (all-wheel-drive) and a range of Suzukis, which could all manage dirt roads comfortably and economically.

We shrank our cars, much the same way Europe had done a decade earlier. Smaller cars meant we couldn't haul around heavy RVs.

As we make this transition to smaller vehicles, increasing the need for lighter RVs, the eXplorer's target market has changed. Australians are now often in the market for campers that easily slip through the air and accommodate smaller families. This unique van does all that, and more.

And the extra features it offers makes it eminently suited to Australia's sometimes-brutal offroad tracks: a ground clearance of about 600mm beats most 4WDs and a tare of 1100kg means it can be handled by smaller AWDs.

The eXplorer's startlingly streamlined shape is the first thing that catches your eye, but this look is not just for show. A review camper was recently seen on the shore of SA's Lake Eyre, where it was home to three people for a week. And not long before that it was zooming up the freeway to the Gold Coast, running securely at 110km/h behind a four-cylinder diesel Nissan.

The body is monocoque-reinforced composite with a fibreglass skin. The chassis on the review unit is somewhat unnecessarily strong given the weight involved - it's made up of two main rails, each 150x50x3mm Duragal box section. However, there are plans to build a lighter chassis, thus shaving perhaps 150-200kg off the overall weight.

Suspension is independent trailing arm with the choice of coils or airbags, and the alloy wheels come in a choice of six-stud Nissan or five-stud LandCruiser pattern, furnished by 10in electric drum type. The camper is pre-wired for solar applications, but two massive 110Ah gel batteries are also on board.

Internally, the benchtops are much the same as in traditional pop-top camper, as are the double-glazed Dometic windows and two roof hatches (with reversible fans). An exhaust fan above the shower further assists with ventilation. Almost all lighting inside and out is LED.

The kitchen is home to a three-burner gas Spinflo cooktop, large sink, 90L Thetford fridge and a generous microwave for the armchair chefs. Hot water is afforded by a Truma gas/electric unit - this is a very good system because having both gas and electric running means you can get piping water in just seven minutes. Entertainment comes in the form of a radio/CD player, plus a clever fold-down flatscreen TV with built-in DVD player.

The cabin is built as a separate unit before being secured to the chassis. A look underneath revealed it is all well-built and properly secured. There is also an external shower in addition to the internal unit.

The future for the eXplorer looks bright. The lightweight go-anywhere camper can be towed behind 2L AWDs, and at $58,000, it's well appointed, with a king-size bed (plus one single), as well as hot water, a shower and toilet.

And with such a low profile, it will go under any branches the tow vehicle can squeeze past. For drivers who like to really get away from it all, the slim line of the eXplorer has to be a consideration.