CAMPER: Congratulations on the milestone, Roger. What’s it been like being involved in the industry since 1968?

Roger Fagan, CUB campers: The whole CUB team is very proud that our company is still thriving after 50 years in the game. Fifty years ago there were around 50 manufacturers of caravans and camper trailers and in name we are the only survivor.

Credit must be given to the Binns family, currently trading as Avida who have also been around for 50 years. 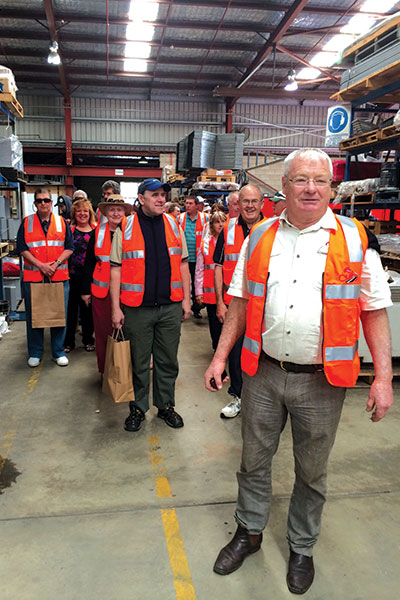 CAMPER: How’d you get started? What drew you to manufacturing campers?

Roger Fagan, CUB Campers: I was born in the Calvary Mater Newcastle hospital in Waratah in August, 1942. My parents later told me this was a scary time as a month before a Japanese sub had shelled Newcastle with one shell landing in the Commonwealth Steel plant, next door.

After school, I failed engineering at the University of Sydney. I was very strong in mechanical reasoning but poor at maths. After working for Lincoln Electric for four years I joined CUB, a retail business selling box trailers which had been purchased by my father.

CAMPER: And how’d that go?

Roger Fagan, CUB Campers: I began making the trailers in a shed at the rear of the property. From box trailers we quickly expanded the range to farm trailers and horse floats and our first camper trailer was box trailer with a canvas canopy with a window and mattress.

In the early 70s, we invented the first softfloor camper which we called the trailer camper. This was a platform containing a double mattress which bolted to a box trailer. Since then, of course, this design has been copied many times with thousands coming in from China. I suppose it is flattering when I look around and see so many copies of our invention.

CAMPER: So the the CUB campers we see today had their beginnings way back then, in the early 70s?

Roger Fagan, CUB Campers: Yeah, and after that was the Cubonda a softfloor version of our very popular Supamatic.

This was very successful and then in ‘75 we released the Drifter 6 followed by the Drifter 7 and then the Eclipse.

The Drifter was our mainstay camper for many years having built thousands and many are still being used today.

CAMPER: So how is it all going now? Still manufacturing in Australia?

Roger Fagan, CUB Campers: Our present factory is on a three acres of land at North Rocks. We use state-of the art computer machinery and employ 60 people. With the aid of this machinery we are able to produce many of the components in-house to reduce costs and have control over quality. I am still very proud that despite massive competition of CUB copies from China and skyrocketing power costs we still manufacture in Australia. The advantage of having a local factory is we can custom build to suit customers requirements and we have 100 per cent control on quality. This is of paramount importance because my observation of Asian imports is the large variation of quality from one batch to the other.

To reduce power costs we have installed 80kW of solar panels on the roof and use the power we generate, with surplus being fed into the grid.

CAMPER: You’re also heavily involved with the Australian Manufactured Camper Trailer Guild. Why is that?

Roger Fagan, CUB Campers: About five years ago I noticed a massive increase in imported campers from China.

Perhaps I should have been flattered as most of these products were copies of my designs. The thing that really upset me were the full page ads in magazines where an importer claimed to be Australia's largest manufacturer of camper trailers.

This was patently absurd, as Jayco is clearly our largest manufacturer and these campers were fully imported.

The ACCC and the magazine editor were not prepared to address these false claims.

Also at that time salesmen of imported campers were making claims such as "made in Brisbane,” which meant the springs and wheels were bolted to the camper in Brisbane.

I then came up with the idea of forming the Australian Manufactured Camper Trailer Guild so we could inform customers which campers were genuinely Australian manufactured.

The Guild has been most successful in getting the message across, particularly visits to our excellent website.

My experience over 50 years after trying canvas from around the world is that Australian canvas is by far the world's best. Even top quality European canvas turned to tissue paper after six months when exposed to our harsh UV rays.

CAMPER: What’s been the highlight of the past 50 years?

Roger Fagan, CUB Campers: My proudest achievement is that we are still manufacturing in Australia, providing jobs and many more jobs for our suppliers.

I believe we have a bright future despite increased competition because of our investment in modern machinery, innovative designs, ability to customise models, and astute customers who want quality, reliability and resale value and are prepared to support local manufacturers.

CAMPER: Thanks Roger. Congratulations again on the milestone — and here’s to 50 more years manufacturing awesome campers!