Get the Best of Everything with the Aussie Swag Ultra Max

Introducing the all-new Australian built Aussie Swag Campers Ultra Max - a top-of-the-line electrically operated rear-fold with more bells and whistles than you can shake a pole at.

First up though, it’s important to note that the Ultra Max does not come cheap. To get your backside in a camp chair outside the Ultra Max will net you a cool $63k, or roughly the price of a new Toyota HiLux with optional leather trim.

As we ran through the trailer from front to back though, it was clear how much more thought went into the Ultra Max than your standard camper trailer. 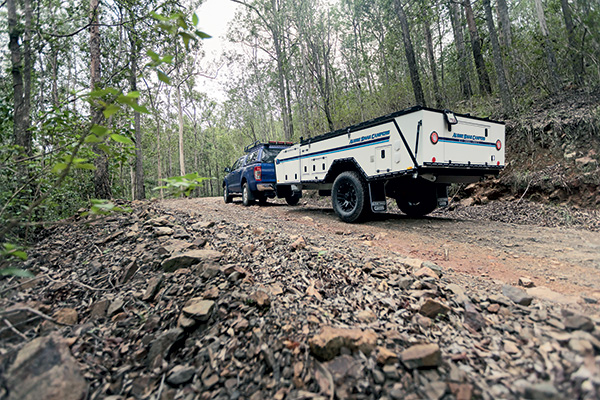 Packing the camper is incredibly easy, and the storage space is unbelievable. Setting the camper up is one of the easiest you’ll ever come across too, making late arrivals into camp a non-event rather than a legal reason for divorce.

There are even a few features standard that many others offer as optional extras too, the most obvious being the diesel hot water system. Even the gas bottles are thrown in!

As far as offroad cred is concerned, you’re not going to break it going through corrugations, or beach washouts, or bulldust. And it’s pretty light too at 1420kg, so unless it’s loaded to its full ATM of 2000kg it shouldn’t act like an anchor in soft terrain either.