There's been a lot of chatter and noise on the social media networks about the new Toyota HiLux having an issue with air cleaners and dusting engines.

'Dusting an engine' refers to when dust gets past the air cleaner in the air inlet of the engine. Dust in the engine acts like a super-fine abrasive (a very effective one at that) which, over time, depending on how much dust and the size of the dust particles, puts paid to the internals of the engine. As you can gather, it is a very expensive fix!

Before it reaches that point, however, there can be other issues. The dust getting past the air cleaner can attach itself, on more modern engines, to the Mass Airflow Sensor (MAS) in the induction system and send the vehicle into limp-home mode. That's annoying and, if it continues, is a sign of trouble to come. 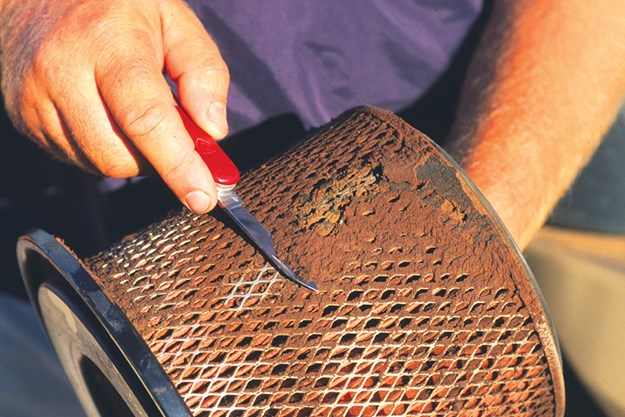 The latest Prado and the Fortuna along with the HiLux, fitted with the 2.8L engine, are getting all the attention, but they are not the only vehicles to suffer from a dust-ingress issue to the engine. I guess any engine can suffer, but some are seemingly more prone to this problem than others – as the new HiLux is showing.

Just recently a friend of mine destroyed the V8 Cruiser engine in his 79 Series when the engine got dusted, while another had a thin film of dust on the wrong side of the air cleaner element. When he queried that with Toyota, he was told it was within specs! In other reports Toyota has said that dust particles of 2 – 5 micron are acceptable, but not everyone would agree with that.

One is the way the actual flat-bed element fits into the air box. Unless care is taken, the element can be fitted incorrectly allowing air and dust to bypass the filter.

Secondly, the element in some cases doesn't seem to seal properly. What some people are doing, including my mate, is cutting strips of Denso-impregnated cloth tape and fitting it to the rubber seal area of the air cleaner box.

Others say that the air box is actually deforming or flexing, breaking the seal between the box and the air cleaner element, and again letting dust past. JMAX and Fatz both do alloy air boxes for a range of vehicles, but these don't come cheap.

I've always said that a good snorkel is one of the first things I fit and I have a safari snorkel fitted to both my Patrol and Cruiser.

Secondly, you've got to service and check your air cleaner frequently and regularly, especially in dusty conditions. Still, you can over do it – as the Donaldson website will tell you, over-servicing your air cleaner not only increases cost but can increase dust contamination due to filter damage and improper installation of the filter element.

In dusty conditions I always fit a pre-filter sock to my snorkel, which takes much of the dust out of the system before it gets to the air cleaner proper. In the old days I used to run a Donaldson pre cleaner, and these are still a very viable option for fitting to a snorkel.

But getting back to the issue with the latest Toyotas and what the company is doing about the problem. Not much by all accounts, although it has been reported that Toyota Australia has asked the powers that be in Japan for a fix. If you are having issues, you better contact your dealer. And if you don't get much joy there, think about improving your filtration system and servicing!