3 Common River Crossing Complications and How to Fix Them

If water gets inside the engine's cylinders, it can cause what’s known as a hydraulic lock. This is when the piston tries to push upwards, but the water won’t allow it to complete its stroke. The problem is, we’re playing with some pretty extreme forces here. Something’s got to give, and it’s usually a costly internal engine component! So, what do you do if you suspect there’s water in your engine? Well, you definitely don’t start it! Instead, you need to find a way to allow the water to easily escape as the piston rises.

For petrol engines, you can remove the spark plugs (all of them) and crank the engine over. If there’s water in there it’ll start to spray out as the engine cycles. 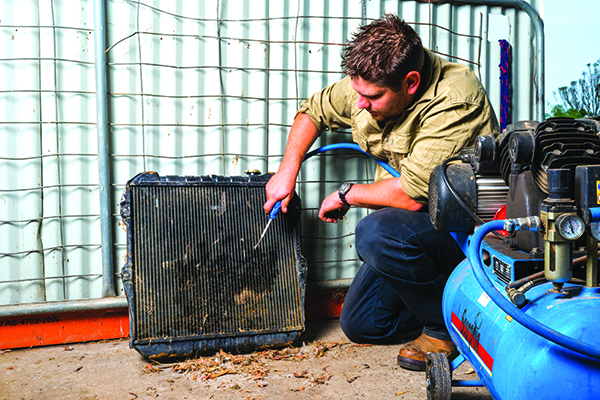 For diesel engines, it’s a little more involved. You may get away with simply removing the glow plugs to let the water out. However, you don’t want the engine to start just yet, so you’ll need to disable the fuel system. For modern common rail diesel engines, you’re better off getting it to a professional, especially if you’re not familiar with how these fuel system works; there are some extremely high fuel pressures involved here making it potentially dangerous.

It’s worth noting if the engine’s air filter is wet or damp, it could indicate water has passed through the air intake into the engine, which warrants further investigation before attempting to start it up again. The filter should definitely be replaced before starting if it is wet too.

Oh, and don’t forget to check the engine oil for water along with the fuel before you kick it in the guts.

The biggest problem with a cooling fan getting damaged is it can end up out of balance, which is never good for anything that rotates. An out-of-whack cooling fan can cause vibrations from the engine, and end up causing more damage to things like the water pump (for viscous couplings). If you really need to have the fan installed to get home, your best bet is to trim the fan's fins down so that they are all equal in size/weight, or find a way to add weight to a completely broken fin.

If your thermo fans aren’t working, a little trick is to try and turn the air-conditioning on, which can often activate the fans from a separate electrical circuit, or activate another electric fan altogether.

It’s fairly common for a fan to hit the radiator and slice a nice big gash through it. This can usually be avoided if you let the engine cool down so the fan isn’t active while it’s submerged. But if you end up with a busted radiator, all is not lost. The idea here is to simply fix the leaking radiator tubes. How you do it will depend on how bad it is and what bush mechanic supplies you have with you. For minor punctures, a bit of metal epoxy could do the job, as will the old trick of cracking an egg in the radiator – yep you heard that right. But if the tubes are completely sliced in half, you’ll need to roll or fold the open ends up nice and tight, and then seal them up with whatever you can – Don’t worry too much about damaging the little cooling fins during this process either, the main objective is to stop the leaking tubes.

PRAY FOR THE BEST BUT PLAN FOR THE WORST

As a rule of thumb, treat every water crossing like you’re going to get stuck. That means having your recovery gear out and ready. In fact, have it hooked up and ready to go with a solid plan B if it’s fairly deep! When you’re stuck in water there’s usually a small window  of time in which you can get recovered and back on dry land before water gets in and damages everything, so the last thing you want is to be mucking around trying to find the bloody snatch strap!

While you’re at it, get any bits and pieces you don’t want to get wet up nice and high, too, that means any paper work/maps, clothes, bags, you name it! It’s also worth switching any electrical power accessories off to avoid the possibility of circuit damage – fridges and inverters are the two big ones here!