When Shane Adams wanted a camper trailer he began looking in the used trailer ads. He was after a good brand with a few years on it that wouldn't blow his budget. What he found was a 1993 Aussie Swag from a seller in Newcastle, NSW.

A 12V electrician from Qld's Sunshine Coast, Shane works Jamie's Touring Solutions, so camping, touring and the related technology is a big part of his everyday life. After four years of attending camper trailer functions, Shane had a strong idea of what he wanted: a hard floor camper trailer from a good brand.

It was actually his boss, Jamie Hazelden, who found the trailer advertised on eBay, and in November 2009 Shane drove south and parted with $4500. 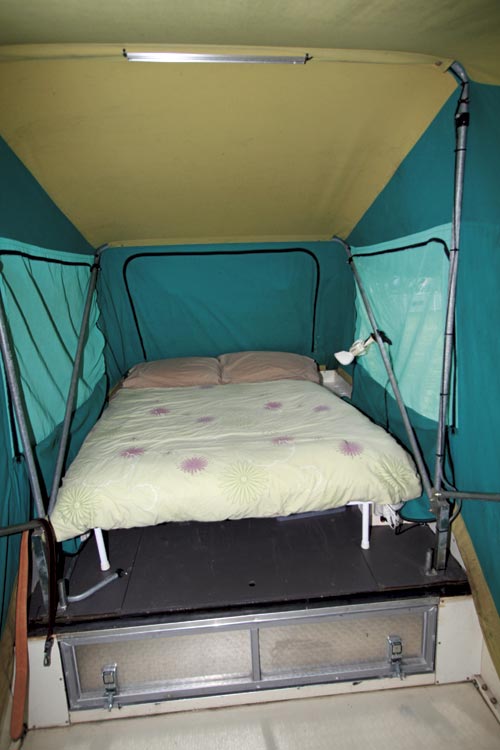 Shane was shocked to find that the trailer had panels that were basically bare zinc, but he had already agreed to buy the trailer and figured it was too late to pull out. The trailer was prime fora makeover. Today, few recognise it for what it once was.

Back at home, Shane's first priority was the trailer's exterior.He weighed up the cost and complexity of refinishing the body and giving it a fresh coat of paint or, more cleverly, as it turned out, having the trailer clad in checker plate aluminium. The latter got the nod and for just $800 he handed it over to Alan Bryce Sheet metal in Caloundra. A week later, Shane picked up a completely refreshed trailer, paying just a little more than necessary to get new mudguards fashioned in aluminium. The tyres were new and there were new 14in Sunraysia rims, so Shane left them as they were.

The trailer's interior was painted brown, so a fresh coat of paint brought that aspect of the rig right up to date.

The bed was on the floor of this model with no space underneath,which meant that gear had to be stacked on top and removed when setting up camp. Shane fixed this with a frame beneath the bed to raise it, providing storage underneath. He also installed a hinge that allows the bed to be tilted for clear access to that space.

By raising the bed, however, Shane found that he'd created another problem: because of the trailer's low profile, the top was more complex to close. He solved this issue with a self-inflating mattress and an electric winch that aids in compressing the trailer's contents when closing.

Gas struts were fitted to the lids of the two in-floor storage tubs for easier and more convenient operation. Gas struts were also added to the top to make opening and closing the trailer less arduous.

The electronics then received an upgrade - inevitable,considering his employment in the 12V RV accessories industry. Anew 100Ah AGM battery with voltmeter, Anderson plug and internal and external sockets were installed. LED lights and taillights were also added. The trailer's 240V plugs and RCD had just been fitted prior to purchase, so they were left alone.

The draw bar area also received some attention. The large aluminium storage box came with the trailer, but Shane disposed of the 50mm ball coupling and replaced it with a Treg poly block,which he says made a big difference to the towing. A single 9kg gas cylinder was replaced with two 4.5kg bottles. As the trailer did not have one, Shane also added a stone guard.

The trailer had neither a kitchen nor any space for one, so Shane devised a simple unit from two pieces of laminated ply that can fold flat and be carried internally under the bed. The two-burner camp stove travels in one of the under-floor tubs. The whole unit stands against the side of the trailer on adjustable legs that attach to crab-claw plates.

Also in the under-bed storage and in the front box is a portable gas hot water system, floor matting, an nearside awning, awning walls, all ropes and pegs and a shower room. The trailer is now fully self-contained for use in any environment; not a bad effort!

The main offside awning remains permanently attached to the trailer, while all poles travel in a poly tube carrier on the top of the trailer. The trailer came equipped with a 60L water tank, to which Shane has just added an electric pump.

About the only area Shane wants to upgrade now is the suspension. The original slipper springs on the 40mm beam axle have served their purpose, but Shane is weighing up the possibility of moving to an independent set-up.

Three years' later, Shane's trailer looks nothing like the old Aussie Swag he started with. It meets his needs and puts him out in the bush with a quality local product at a minimal cost. Seems like smart thinking to us.