The tyres that roll beneath our trailers get relatively little or no thought from most of us. They might occasionally get a pressure check when we are filling with fuel or, if we are conscientious, before a major journey, but unless they go flat that is often the limit of our consideration. And all that time we are sitting on a ticking clock that counts down to the day when one or more of them will give out, potentially in the most disastrous fashion at the worst possible time, leaving us stranded or even jeopardising our significant investment in our trailer and its contents or, even worse, injuries to ourselves, our family or other road travellers.

The simple fact of the matter is that tyres age, slowly and inexorably, even as they sit quietly in our yard or garage. There is little that we can do about it, except to maybe slow it a little and to monitor them and then, before they bite us, to have them replaced with new units that will give us a new lease on life.

The tyres on towed vehicles, such as camper trailers, in general don’t suffer from too much wear, despite being dragged along behind their tow vehicle. They don’t have to steer and generally perform only a minor role in braking, so usually simply follow in your vehicle’s wheel tracks. Even those tyres on campers that are on the road constantly will usually live out their life with plenty of tread on them and only minor amounts of visible wear. 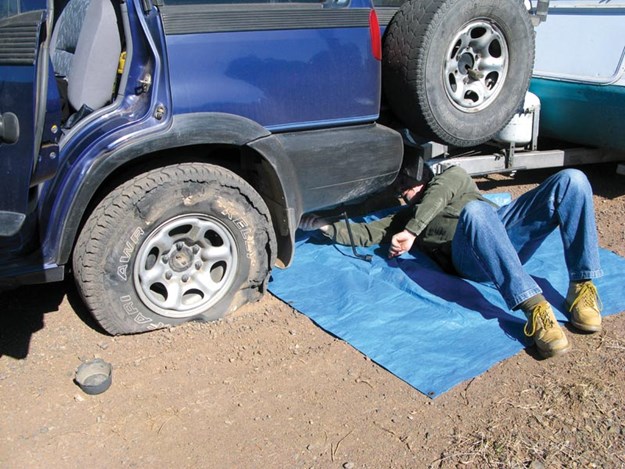 It is this very fact that leads many owners to forget all about them, other than that occasional topping up of the internal air when it’s convenient, and it’s this factor which leads to so many trailers with seemingly inexplicable tyre failures.

“Boats and campers are the biggest offenders in this area because they don’t get used as much as a car so the tyres don’t wear out, and if you’re spending money then the last place you’re looking to spend it is probably on the tyres for your boat trailer, camper or caravan. And people do silly things like overloading their tyres, either by buying a bigger boat or carrying too much gear in the caravan or camper and all of a sudden there is too much load on those tyres. They’re the biggest candidates we have for people not giving them enough love.

“If you were driving along in a car and you started to have a problem with a tyre and it started to lose air or you had a separation of the outer layers from the case – which is probably the biggest age-related problem we see – then you would start to feel a vibration or the vehicle’s handling would alert you that something is wrong, but with a caravan or trailer you would have a lot less chance of noting the problem until it was too late.”

For many owners of larger RVs, boats or campers the towed weight can be in excess of two tonnes on a single axle, so weight across those two tyres can be in excess of a tonne per tyre. That’s the equivalent on a car, with four wheels, of a vehicle weighing between four and five tonnes, yet tyre load ratings, construction and/or tyre pressures are just not up to those sorts of loads.

After five years you should have your tyres inspected every year, by a tyre professional at a reputable brand tyre shop. Depending on storage and treatment they can be okay up to 10 years of age, after which they should be replaced as a matter of course, regardless of appearance.

“We would recommend always talking to a tyre professional,” Jon continued, “as some amount of ozone cracking is normal. It comes down to an assessment of tyre type and construction, the depth and shape of the cracks and how much they come together. A professional will have been trained in what is acceptable and what is not.”

It is possible to undertake basic inspections yourself. You’re looking for such things as the fine network of ozone cracking in the tread and sidewall as the main indicator, as well as signs of underinflation, creasing, and discolouration, with the tyres going blue in the shoulders. Ozone cracking in the sidewall, Jon explained, is an indicator of problems but is not what is going to cause the tyre failure.

These diagnostic features will vary according to many factors.

“If you live in Darwin or North Queensland a tyre professional will probably find it necessary to replace your tyres at five years, regardless of condition,” says Jon, “because of the degradation of the rubber is strongly impacted by heat and humidity. However, if you live in Tasmania, where it’s much cooler, and you drive everywhere on sealed roads you’ll stand a much better chance of getting to the 10 years before having to replace them.
“After 10 years the strength of the rubber bond to the steel belts in the tyres is greatly reduced so the chances of having the steel belts separate and the tyre blow out is much higher.”

The nature of storage of your trailer or caravan – in other words the environment in which the tyres sit when not in use – can be significant.

“Heat and sunlight are two of the more important factors so storage inside assists in ensuring a longer life,” Jon explained, “but one factor which many people don’t recognise is the proximity to an air compressor. These, or any electrical motor, emit a lot of ozone and this is the main catalyst for rubber breakdown. Solvents or petrol can be harmful, as can oil-based tyre shines. Using nitrogen to inflate your tyres can be helpful to extending tyre life as the degradation of the tyres comes from the oxygen in normal air, which permeates through microscopic gaps in the rubber, and nitrogen is completely inert. It does not react with the rubber and does not permeate through the rubber so the need to check tyre pressures is not as great.”

One other factor that is not often observed is rotating your tyres from side to side of your trailer. This should probably be done every 5000 to 10,000km, according to Jon, which can reduce uneven wear.

Wheel alignment, especially with independent suspensions, is also important. Just one degree out of alignment equates to the tyre being dragged sideways 17m for every kilometre it travels. Any sign of uneven wear or “feathering” of the edges of the tyre tread should be looked at.

The greater the tyre use the more flexing is involved in the rubber, so this has an obvious impact on tyre life, notwithstanding the fact that even if a tyre has been stored away for 10 years and only done a handful of kilometres it’s still unlikely to be any good.

That ultimate life span of a tyre can really be put down to a continuation of the vulcanisation process – the heating of the rubber with other chemicals to form a less sticky and more durable and mechanically sound material – in the rubber after manufacture, which results in a hardening of the rubber so that it becomes more brittle.

Another factor in tyre life was a change away from carcinogenic hydrocarbons in manufacture several decades ago but this has been offset by great improvements in the design and construction of tyres which has more than compensated for the losses resulting from the hydrocarbon changes.

“The main cause of failure in tyres due to age is belt separation,” Jon continued. “The industry has a far better knowledge of radial tyres, which have been the norm now for quite a while, in preventing this through tyre design. However, it’s still a fine art.”

Tyre design – all terrain, light truck, highway terrain, etc – does not have any impact on the rate of degradation because the failure really occurs between the skimcoat of the tyre with the steel belts which is the same for all tyre products.

To assist you in assessing the age of your tyres the date of manufacture is a four digit number (since the year 2000, before that it was three digits) on the sidewall. These are easy to read. For examples the number 1013 is the tenth week of 2013.

Failures in the tyre are usually due to the breaking of the bond between the steel belts just below the tread and the outer tread. This might become visible as a bulge in the tyre and may be evident as a vibration. If you kept driving the belts would finally break completely away from the tyre, causing damage to the caravan or trailer in the process and maybe wrapping around the suspension, and the tyres would become very flexible. The tyre would retain pressure for a brief period but would soon blow out.

Good tyres are a good investment in the security and safety of your caravan or trailer. Look after them, but know also that they have a finite life.