You’d be amazed at how much money you can save by shopping smart. What do I mean by that? Well, have a think about how you can make the most out of the ingredients you buy. Can you make several different dishes out of the stuff you just bought? Or can the meal you plan on making form the base of other meals?

For example, I’ll generally buy a good lump of beef mince to make a real crowd favourite – spaghetti! But I will typically cook two or three times more than we need for the one night, and use it later on. Sometimes it winds up on toast, other times it goes into a tasty camp pie. It makes a great topping for those loaded potatoes (with melted cheese of course – yum!) or even stuffed capsicums. Stretch it out a little further by adding in some extra veggies like mushrooms, carrots and peas, then pour in a tin or two of spicy sauce for a little extra kick, along with a few kidney beans if you want a great chili con carne to keep you warm!

Keeping all this in mind, it's time to whip up a couple of CTA-approved cheap and cheerful meals that won't hurt the hip-pocket. 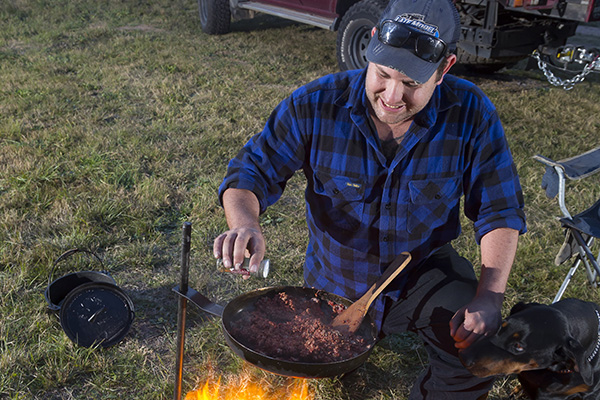 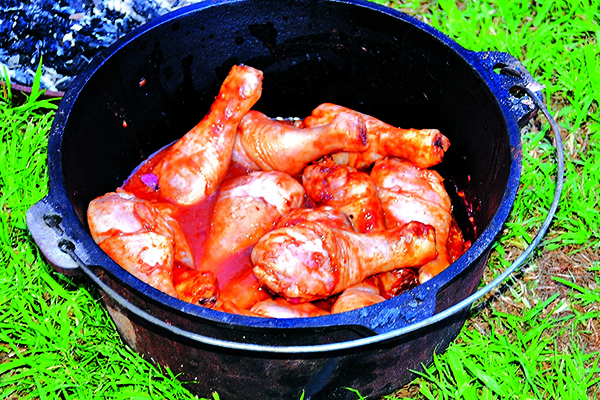 Here’s one meal that’ll have you dribbling every time you get a whiff. Kick things off by pre-heating the camp oven while you combine roughly three parts tomato sauce to one part Worcestershire sauce in a separate bowl. You can add some thinly sliced onion and garlic too if you want. Then add everything, including the drumsticks into the camp oven ensuring the sauce covers the drumsticks. You’ll want a thin bed of coals underneath and a good shovel or two of coals on the lid to get the heat nice and even. Then whack your feet up and have a few coldies while they simmer for an hour or two. When they’re cooked, the meat will fall of the bone, and it will taste like you’ve just won the Lotto! Serve them up with a bit of rice and mashed potato, and let the sauce dribble through

OK, so I’ve come in a little over budget here, but what can I say? I live life on the edge! In my defence you can dull it down a bit, but where’s the fun in that? After all, this is the kind of recipe that will trick even the most suspicious of campers into thinking you can actually cook – trust me, it works! Now I don’t need to run you through a step-by-step, you should be able to figure out how to cook mince yourself, but the great thing about this meal is it can be cooked in a variety of different ways.

Fry up the mince and beans in a pan then put them in a camp oven with the chips and cheese on-top for baked goodness, or serve it up onto a plate with the chips underneath if you’re in a hurry. If you’re adventurous, a few sliced jalapeños and some guacamole make it a sure-fire hit; just bring plenty of liquid refreshments along.

When Borgy threw down the $10 tight-arse challenge I headed straight to my favourite East Gippsland hideaway. There’s a spot there near the entrance, hidden just below the surface where barnacle encrusted mussels grow wild on the ancient rocks. They live in a cocktail of water running down from the Great Dividing Range, splashing in to the Tasman Sea. They are the magical ingredient in my $10 challenge. What’s more, they’re 100 percent free (not allowing for the $30,000 boat I skippered to get there!). Anyway, this recipe was passed on by a salty old Italian fisherman, so it’s guaranteed to be simple yet flavoursome.

Start with a large pot for the mussels and a smaller pot for the pasta. Add some water to the smaller pot and bring to boil, but don’t add the pasta yet. Sample the wine. Brown the garlic and onion in the large pot with the oil, and then add the crushed tomatoes. Once mixed, add a glass of white wine, pop the lid on and simmer on low. Drink glass of wine. Time to add the pasta to the pot of now-boiling water. Sprinkle some salt and olive oil into the pot so it looks like you know what you’re doing. Now chop the chili fine and throw in the red broth with all the mussels as well. You’ll wish you had a bigger pot at this point. Give it the pepper treatment and stir the mussels through. Have another glass of wine. Simmer until the mussels open – and then just enough for the meat to firm up a little bit (about 5 mins). Serve on top of the now cooked pasta with some parsley on top for effect. Eat the closed ones. Mop up with some crusty bread if the budget allows! Finish with a glass of wine if there’s any left.

Remove all the meat and skin from the bones and chop coarsely. Add to a preheated and oiled hot pan and brown the meat. Add the onion and cook until soft and translucent. Pour over 4tbs of hoisin sauce and combine well with the meat and onion.

Spoon mixture into lettuce cups and serve. Garnish with corn and serve it up!