Is there anything better than a meal cooked over a fire in the bush? I think not. And, after a lifetime of sharing the camaraderie of burning wood and cooking food (not always that way around), for me, it only gets better. So before you plan that big trip around the block or even the next weekend adventure, try and work out how you’re going to include a few fire-cooked meals in the itinerary. This, after all, is what Aussie bush travel is all about!

Now, I’ve got to thank Sandi Johnson for sending me so many excellent photos from the Bush Cook Off in Tasmania I attended. I wrote it up here, too, in the middle of a month of shows and trips all over the country and used several of Sandi’s photos but, somehow, in all my confusion, she didn’t get a mention.

“Yes Chooka, it might have had something to do with the copious amounts of cold beer required to refresh the palette between courses. And do you mind not leaning over me? You’re spilling beer on the napkin I’m writing this yarn on. How do you expect them to believe I’m a professional writer-type bloke if my copy comes down with dribbles on it? 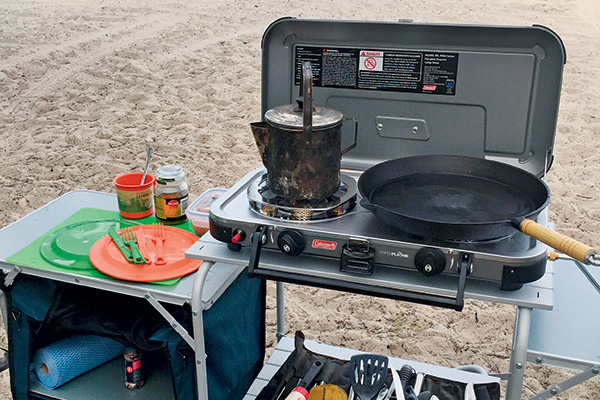 “They might even think I’m knocking out some words while waiting for a counter lunch at the Mudflats Hotel. My goodness, that’d never do...”

Talking food because, if I don’t, my stomach does, I figured I’d better expand a bit (like my belt over the years...) on some of my favourite bush cooking techniques. Having had to cook under some incredible conditions in some incredible places over the years, I’ve come to believe that almost anything’s possible in the bush as long as your victims, err, companions, have had a few drinks before the meal is served.

Sometimes that can be too many. Memories come flooding back, like the first cold beer going down after a hot desert crossing. But the big one has to be a trip several years ago where we were exploring some of the wilder parts of the west coast of Tasmania.

Now, this is a windswept part of the world where amazing things happen and the weather can change quicker than Aussie prime ministers. We’d been battling into the night up a black soil track that had mud holes over the bonnet, trying to make it to a nice little grassy spot I’d remembered from a previous trip. Sheltered by some hedge-like trees, with a morning view over the beach, it fulfilled a whole lot of demands from the videographers and the stills shooter as well as providing enough room to circle the wagons.

On that trip we had a couple of sponsors with us; Glen Hadden from Roo Systems had brought his brother in law ‘the Super Coach’ along for the ride and TJM had sent wild man Donny ‘The Christian’ Shewring to drive a much modified Toyota. None of these chaps were strangers to the odd beer. In fact, you could safely say they drank the even numbered beers with the same amount of gusto. It was a work trip for me but a party trip away from home for the sponsors, as usual (Gee, I hope my wife reads that last line. And I hope she believes it...)

So we’ve reached my grassy patch well after dark, after Milo blew an axle in a puddle, and everybody’s cold, wet, filthy and starving. Beauty. It’s kind of hard to get a hot meal to taste bad when you can hear bellies rumbling. The TV team set the scene and I was blinded by lights as I put together a big Guinness roast recipe in the old cast iron pot.

It was big enough to take a couple of hours in hot coals, but that time got soaked up going through the motions of another cooking segment that we’d blown the night before in far worse conditions on the beach itself. Gale force winds don’t always do it for voice quality, apparently...

Meanwhile, the sponsors are tucking into their fridges with all the appetite of a politician at a party fundraiser. I couldn’t hear this because they had to keep quiet anyway and all I could see was the occasional silhouette behind the camera.

Finally, shortly before midnight, the roast is carved, the dark, mushroom-thickened Guinness gravy is draping itself over a bed of meat and mashed potatoes and it’s time to do the ‘glory reveal’. This is when someone gets invited in to taste the meal on camera, shortly before we all get fed and go to bed.

It’s usually a sponsor, so I’ve called out for Glen to come on up, knowing that his Irish blood and huge frame would make ‘meat and potatoes’ almost irresistible.

There was a big crashing sound as one of the light stands got demolished and suddenly Glen appeared in the lights, barging at the presentation table like a bear on a rampage. He was supposed to come around and face the camera but, no, he just put his head down and destroyed that plated masterpiece. He was all hands and whiskers and, in a series of slurps and belches, dinner disappeared.

Now, I knew we’d be filming that again anyway, so it was no surprise when our producer made the call. Apparently they couldn’t film anyway – Gav the cameraman was doubled over with laughter and had missed the focus entirely and there was a bit of an issue with lighting, given one of the LED panels was lighting up the moon.

It turned out to be one of the best meals I’ve ever cooked on the road, more thanks to some beautiful Tassie beef mixed in with Guinness and that perfect salty air blowing off the ocean. I love Tasmania...

I love cooking, too. Now I know most of you are probably right into your bush cooking and I’ve been fed some absolute delicacies by fellow travellers on my own travels, too. But for those who’ve not tried it yet or who’ve not thought of including some fire pit-friendly stops in their tour, please, consider!

The full feature appeared in Camper Trailer Australia #97.  Subscribe today for the latest caravan reviews and news every month!