As things go, Dirk Hartog was a pretty good mariner. Of Dutch extraction and skipper of the Eendracht, it was his job to head to the East Indies – known these days as Indonesia – with pockets filled with gold for the Macassans in exchange for spices and all the mystical things not found at that time in Europe.

Now it was a fairly new route that he was taking, via the east African coast and around the Cape of Good Hope, then hang a left and using the Roaring Forties, head north East to the Indonesian Coast. Simples!!!

However, there was one thing that the navigators of those days didn’t have a good handle on and that was lines of longitude. In other words, they didn’t accurately know where they were and a lot of the time they were guessing. And so Hartog found himself hitting the Australian coast in what was to become the first recorded European landing. 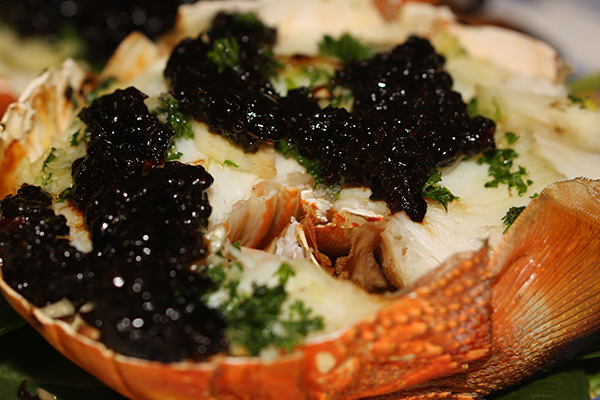 To mark his chance visit, he nailed a pewter plate to a wooden post, checked his bearings and headed to Indonesia, to complete his mission. That was 400 years ago at Dirk Hartog Island, and October we celebrated the anniversary of that occasion in Denham, Shark Bay.

So it was that I found myself on a journey to see what attracts so many tourists to this otherwise remote corner of our country.

My friend is a marine biologist working at Shark Bay and a bit of a vegetation type, so the meals took on a decidedly herbivorous bent.

Oh, and if crayfish were to be considered a vegetable, I threw it into the mix in order to keep my temperament even.

You can easily spend a month poking around the area. There’s so much to do around Shark Bay, but make sure you take your fishing rod, for the seafood abounds in the sheltered waters of the bay surrounding one of Australia’s most important historical areas.

This dish utilised all of the bounty from my friend’s garden.

Cook the fettucine according to packet directions.

Add the garlic to one tablespoon of olive oil. Cook for one minute then add the asparagus, eggplant and tomatoes to a medium heat pan and saute for up to 5 minutes until the vegetables are al dente.

Drain the fettucine and toss the vegetables and the herbs together. Add a drizzle of your favourite oil, then sprinkle the goats cheese over the top. Serve with a crisp bread roll to sop up the juice

• I 4 asparagus spears, cut into batons

Heat the chicken stock until boiling, reduce heat to a simmer and add the garlic, cumin, cinnamon and turmeric and stir gently for a couple minutes till well combined. Add the couscous and stir, then set aside to absorb the stock.

Meanwhile to an oiled pan, saute the vegetables until just cooked. Once the couscous is ready, stir through the sauteed vegetables and drizzle with the lemon juice prior to serving as a side dish.

Heat the oil and fry the ginger, garlic and chili until soft, add the black beans, kecap manis, palm sugar, and pepper and cook on low heat until the sugar is dissolved. Moisten with the soaking water until the mixture is liquid but still thick.

Serve atop your favourite fish or crustacean. Delicious.