When I lobbed into Broome, WA, recently, I heard that friends of mine from Robe, SA, were in town. Rob and Rosie Kay had just taken the scenic route to Broome and had copped incessant rain and bogging on their way over.

They moved to Robe a year ago to spend a little more time trying to retire, and were delighted to learn that Robe had become somewhat of a foodie destination.

Rosie is a wonderful cook and she and I have spent many an hour noodling in the kitchen when I spent years camping with them on the Murray. 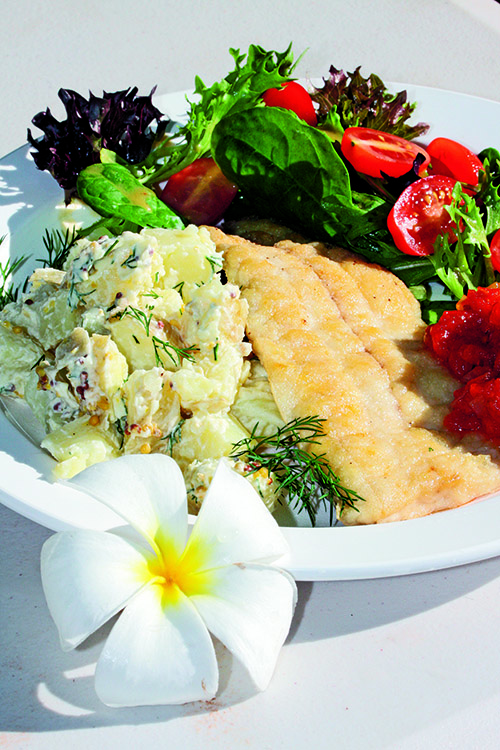 So it was old-school week when I got there. Add into the heady mix Ron and Viv Moon, and you can only imagine what delights befell us when meal time came around.

Now, we all know of Ron Moon’s reputation. He is one of the industry’s most experienced outback travellers, and he and my mate Rob traded stories for hours over beer and rum.

You see, Rob’s been around. I think he got his grounding at a very early age when his parents used to lock him out of the house. Rob was a handful, you see.

And he developed a wanderlust at a very early age. In fact, Rob first drove the Canning in 1977 in his mighty FJ45 LandCruiser. And that’s just one of Rob’s many forays. He drove for AAT Kings in the early 80s. He had the pick of the trips and always threw away the published itinerary whenever possible and went where he and the passengers wanted to go. His trips were legendary, in every sense. Many of the places Rob went in his 40ft Denning Coach have left jaws dropped and minds boggled. He is one of the 4WD industry’s quiet legends until, that is, you get a rum into his guts.

So, around our camp, the stories were coming thick and fast. They’re both wonderful conversationalists and add into that fine food and just a few drinks and the stage was set for a great time.

So it is, dear reader, that I take you to the topic du jour. Robe has some wonderful eateries, great farm gate enterprises, and a culinary bent. And it’s always a great joy to visit the Limestone Coast.

And since Rosie started her own yoga studio (www.yogainrobe.com), she encourages her clients, infact everyone she sees, to eat well, including poor old me.

These are three of Rosie’s favourite recipes and I know you’ll like them.

Robe Dairy makes a Middle Eastern yoghurt-based cheese called labneh. It’s quite literally hand-made using the freshest yoghurt from their small herd of Jersey dairy cows and then wrapped in muslin cloth and hung in the fridge for a few days.

It’s creamy, tart and partners well with the earthiness of the beetroot in this seriously pretty and simple starter.

For good colour use a 2:1 ratio. Two parts Labneh cheese to one part beetroot. Mix together, season to taste if you think it needs it and serve with the usual healthy suspects like carrot, celery, cucumber sticks, beans, dry bickies or toast points.

Boarfish is one of Robe’s little secrets and a favourite with my mates but, as we were in Broome, I used bluenose that we caught in Roebuck Bay.

You can make the tomato sauce and the potato salad in advance, as the fish takes only moments to cook.

Sauté onion, celery in a little olive oil add garlic. Add vinegar and sugar then reduce. Add mixed herbs (add chillies if you like), as well as tomatoes, cook on moderate heat for 20 mins or until reduced to a thick sauce consistency. You can prepare this sauce well in advance and serve at room (or slightly warmer temperature).

Mix potatoes with sour cream, wholegrain mustard and dill then season to taste.

Combine all of the ingredients in a screw top jar and amalgamate. Season with salt and pepper to taste.

Dip fillets in corn flour and shake off excess, season with salt and lemon pepper. Heat up a sauté pan till hot with 1-2 tbsp of oil and around a tablespoon of butter. Sear fish on both sides for about 2-3 minutes, depending on thickness.

Arrange the dish and drizzle the lime dressing over the leaves and tomatoes.

Heat the butter in a small non-stick frypan until bubbling vigorously but be careful not to burn.

Add the honey stirring constantly as it easily burns. Keep smelling it, you will know when it is ready as it gives off a delicious toffee smell and it begins to thicken. Take it off the heat, add the nuts and keep stirring until it cools enough so that the nuts have a reasonably even coating of toffee. Place on to baking paper. Use two forks to separate the nuts, sprinkle with salt flakes, let cool then place everything in the fridge. Be patient, it takes time to lose the heat and develop the crunch.

When cool, arrange with rhubarb and yoghurt (or ice cream) and enjoy.