Fresh from the factory floor and fully equipped, the Aussie nomad has room to spare.

We reckon that MDC’s motto should be “you get a lot more than you bargain for”, especially after taking a tour of its Aussie Nomad. If you are in the market for a trailer to take the family and all the kids’ friends away for an all-in holiday then this is the trailer that will house the lot — kids, dogs, bikes, mates and all. Its footprint is simply huge. This is a destination trailer with the lot.

The area under canvas has enough capacity to house an army, and once you get to that ideal destination, you will keep them warm, dry, clean, fed and entertained with the long list of fittings and accessories like TV/DVD player, separate hot water service, a full kitchen plus separate stainless steel barbecue, an enclosed toilet, and plenty of storage. 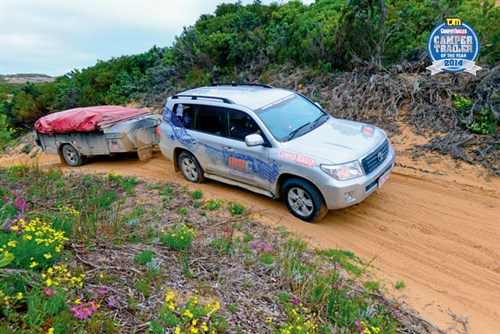 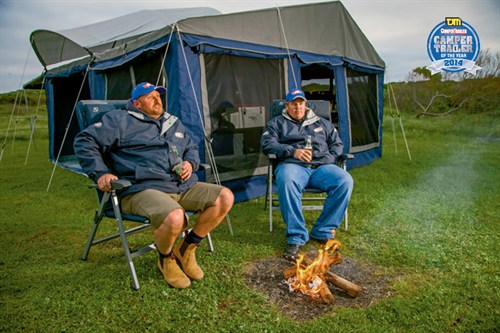 The Aussie Nomad comes standard with full-length Wax Converters 12oz canvas awnings off both the front and back of the trailer, complete with detachable side walls and plenty of convenient windows, flyscreens and doorways on the front.

It’s a large tent even before you consider the awnings, due to the extra trailer length created by the walk-through access in front of the bed. MDC has shown quite some innovation in this area, with a slide-out Porta Potti under the queen innerspring mattress, which slides out into the walkway and tucks back away again neatly.

There’s even a TV/DVD on a flexible mount in the walkway, tonnes of room to keep loose bags and accessories, a fold-down chequerplate stairway and even more drawer storage to boot.

At the rear of the trailer the bumper/dual spare-wheel mount pivots on strong hinges. The tailgate drops down to reveal the big stainless steel kitchen featuring a sink with cold running water, a three-burner stove and plenty of bench space from the folding top, and a further pull-out slide underneath. The 60L evaKool fridge pulls out and pivots around to reveal even more slide-out pantry storage from twin sliding drawers.

The Aussie Nomad is mounted to a strong box chassis and MDC manufacture its own independent trailing arm suspension. It has a Tare weight of 1050kg and an ATM of 1900kg on 265/75 R16 all-terrain tyres, giving more than 800kg loading capacity to carry the load for an extended vacation.

We find twin 85L poly water tanks giving enormous capacity under the trailer, and out front there is a stone deflector, hand brake, a swing-down jockey wheel with pneumatic tyre, an offroad polyblock coupling, twin jerry can racks and a gas bottle bracket, along with a large gull-wing tool box for even more accessories, canvas etc.

The outside of the trailer is very neat, with lockable recessed doors concealing all manner of goodies. There are mounting brackets for two more 4kg gas bottles, a separate compartment for the portable Aqua Cube hot water system, a stainless steel barbecue on slides and a pull-out drawer, all on the driver’s side.

The opposite side has the fold-out staircase, a storage compartment with the Fusion sound system neatly concealed at the rear and an electrical cabinet that houses twin 100Ah batteries, bMs battery charger and inverter (note: not pure sine wave).

Overall, the Aussie Nomad provides an amazing amount of value for your hard-earned dollar, as well as a hugely accommodating volume with plenty more features to consider. This is a brand new design from Market Direct Campers and it presented its prototype for evaluation. It had a few rough edges that will obviously be ironed out in full production, but we must congratulate the people from MDC for completing their wonderful new trailer in time for Camper Trailer of the Year.

MDC has really put the cat amongst the pigeons with its innovative range of campers at budget prices. The specification sheet is amazing for the money and the general construction seems solid, as does the canvas quality. It’s not a quick trailer to fully assemble with the considerable amount of canvas, but once complete it will become the entertainment centre for the whole camping ground.

It is also MDC’s flagship venture into Australian trailer manufacturing with a very high local content, a factor high on the list of many Aussies’ purchasing criteria. The Aussie Nomad steps up another level as a fully equipped offroad machine, which will house the entire neighbourhood — not just your family — at a realistic price.

To discover the MDC Aussie Nomad's final score, be sure to check out Camper Trailer Australia magazine #73. Why not subscribe today!

PHIL LORD: The Aussie-built MDC doesn’t fall short on value or features and is a well-built long-stay camper to boot. Lots of water capacity, battery capacity and even a Porta-Potti and shower make this a comfortable camper for extended stays at remote locations. But a solar panel as standard would have improved the Aussie Nomad’s standing.

In some respects the trailer is quite promising for offroad work: strong tyres and strong chassis, yet clearance and underbody protection are curiously lacking.

This is the full monty; the Aussie Nomad is decked out with everything you could possibly expect at this price, from a loo to a TV. The only thing missing is that solar panel.

With loads of bling for the bucks, there is still the question of strength and durability of this product in arduous conditions.

JOHN "BEAR" WILLIS: I call the Aussie Nomad the “destination trailer”. It has a huge footprint with a large tent, full-length front and back awnings, and a tonne of features and accessories for an extremely attractive price. If you have a big family that needs plenty of room then the MDC could well be your trailer.

While it has the construction to tackle offroad sojourns, including full independent trailing arm suspension, 10” electric brakes and a polyblock coupling, for me its main purpose is to travel to your own utopia and set up for an extended holiday with tonnes of facilities — hot and cold water, a separate stainless barbecue to the main kitchen, plenty of gas and reasonable power supply.

For me you can throw away the TV, but those with young families will appreciate being able to shove on a DVD to keep the youngsters occupied. There’s tonnes of storage for all the gear and I really like the walk-up facility. MDC has employed a change in manufacturing procedure in the Aussie Nomad to concentrate on Australian production, and I congratulate it for that.

DAVID COOK: A brave attempt at an all-Australian build from a company that has always been associated with imported campers, and at a price that will likely ruffle a few feathers. When finished and with the wrinkles worked out it should be better.

some of the finishes were a little rough in places, like the ends on the fridge slide channels. I’d also liked to have seen gas bottles and the fridge secured properly, as these would be knocked around on corrugations and gibbers.

The 1000W modified sine wave inverter is not as good as a 300W pure sine wave, in my experience.

This camper will probably sell well as it will have things like an “Australian” tag and Australian canvas, which many buyers seek but, as with most new products, will likely get better as some of the smaller details are refined.

MIKE PAVEY: Great potential as a destination camper with plenty of inclusions, but impacted by low annex door height and some fittings not working as required. Modified sine wave inverter not suited to televisions or computers.

As for ease, there’s lots of canvas to set up, otherwise it’s got an easy-flowing kitchen and a good TV pivot. There’s potential appeal as a well-kitted destination camper, though there are some quality issues to resolve initially.