The Step-Through from Market Direct Campers (MDC) will strongly appeal to families looking for an affordable yet comfortable entry into the camper trailer world. The first thing that strikes you about the Step-Through is the huge floor space. With its annex walls erected, this thing is palatial and will facilitate harmonious family camping trips, with plenty of space for everyone.

The trailer comes supplied with a complete set of walls plus floor for the annex area, with flow-through ventilation built in. Given the amount of canvas included, quick overnight stops would be challenging and would probably quickly be off the agenda. Instead, this camper excels as a family holiday maker, perfect for pulling up stumps and settling in for a week or so. The trailer comes with a DVD on how to set up, which is helpful, however speaks of the inherent challenges that come with all that extra canvas. 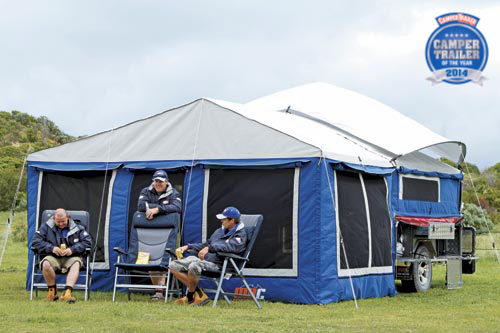 MDC has developed this product to squeeze in as many extra comforts as possible, without letting the price skyrocket. Access to the innerspring queen bed is via a “step-up” walkway. A wooden table slots neatly into this area during travel, which is a great feature albeit a little agricultural in its finish, and the space beneath doubles as storage.

The kitchen is a beauty — a powdercoated number with a two-burner Smev stove supplying the heat. The sink is stainless steel and serviced by an electric pump pulling water from the 85L tank. There are no drawers but there is some storage under the stove and sink area. You would still need a pantry tub for longer trips, but there’s heaps of room for this to be stored on the tailgate. The fridge and fridge slide are extras and not included in the price.

The trailer comes with entry-level electrics, including a 100Ah calcium deep-cycle battery, which runs the two LED strip lights and a couple of 12V outlets at the rear. An Anderson plug and 10amp charger puts juice into the battery, while a 100amp modified sine wave inverter does your inverting. For me, I wouldn’t risk a modified sine wave inverter. I am no expert — and worse, I am a bloke — and I would easily forget what I could and couldn’t use such an inverter with. Personally, the extra money for a pure sine wave would be an investment, not an expense.

Storage on the Step-Through is impressive, with space in the tub (accessed via the lift-up base), in the walk-up area and several lockers along the outside all keyed alike and equipped with automotive seals. The front storage bin is big enough to house your Porta Potti and even has a handy, full-length shelf to help make the most of the storage room it provides.

The Step-Through has a polyblock hitch and seven-leaf spring suspension with shockers. At 1050kg dry, it’s not a ridiculous weight, but still 57% heavier than its competition, the Trackabout Kakadu. It’s also 5.1m long, which would somewhat limit its performance on tight mountain tracks and other similar conditions.

That said, MDC has put together an excellent package with plenty of fizz for a realistic price, and that’s why the Step-Through is the Camper Trailer of the Year in the Under $15k category. Long summer breaks by the beach are what this camper is all about, and that sounds bloody good to us.

To discover the Market Direct Campers Step-Through’s final score be sure to check out Camper Trailer Australia magazine #72. Why not subscribe today!

PHIL LORD: The MDC has promising offroadability and some facility to remote bush camp, too. Leaf springs and a solid 60x60mm beam axle will take a lot of punishment offroad and the standard Wanli tyres are also very good.

While neat touches such as press-stud straps to hold tent flaps look good there is a question mark over the longevity. They appear a bit flimsy.

There are so many standard features in this camper that you simply don’t expect for the price. Even small touches such as greasable hinges and outer window flaps are all features you don’t see on far more expensive campers. The MDC has a lot of fruit for not much cash. On the surface it appears it has value and features to sell like hotcakes.

EMMA RYAN: It’s targeted at budget-conscious families, and for them it delivers a spacious camper with all the basics. The assortment of gear for the price is the innovation.

Power supply is adequate, but an AGM battery rather than calcium would improve things. It has loads of internal living space and storage, which will make camping comfortable and practical. Setting up all that canvas is a process, but the benefit is that once it’s up, it’s palatial. Destination camping is where it will excel; it’s not a tourer.

In my mind, I often measure rooms in cartwheel lengths. From annex wall to far annex wall, I reckon I could get three in. That spells “wow” to me!

JOHN WILLIS: This one’s well equipped, with plenty of gear for the money — lots of canvas, kitchen, tool box, it’s all there; a big volume camper trailer with a big footprint.

It’s a combination of existing ideas but done well for the money. Like the table on the walk-through — there are some good ideas. There are obviously some lighter components in places — hinges, locks etc — but that’s more than acceptable for the price.

As to its ease — three people, half an hour… that’s a bit fiddly. It’s a damn good finish for a budget camper, though — it’s powder-coated body not painted and the canvas seems quite reasonable to me. And it’s BIG.