Tucked away along Tassie’s wild west coast, Strahan is known as the western gateway to the mighty Gordon River and the World Heritage-listed Tasmanian Wilderness Area. The small harbour town has a fascinating convict past, with infamous Sarah Island the site of the unforgiving penal settlement. Strahan might be small in size but it has plenty to offer the adventurous traveller.

It doesn’t have to break your budget either, because a spot at the Macquarie Heads Camping Ground costs just $6 per family, per night. The spacious camping area is a stone’s thrown from the ocean and provides shelter from the wind. The fishing is good, too, if you feel like throwing in a line and beach access is just a little further along the road.

We arrived early afternoon and paid our fees at the caretaker’s office. He welcomed us with a smile and told us we could plonk ourselves down wherever we wanted. The camping area does not have numbered sites or bollards so you have a lot of flexibility when picking a place. Most sites are fairly secluded so you don’t have to worry about privacy. We had no trouble locating a quiet area, not too far from the drop toilets. 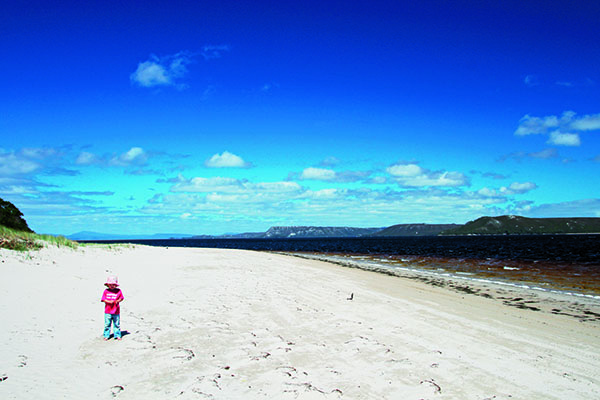 After setting up our tent, we hit the beach. The kids ran up and down, screaming at the top of their lungs. Three-year-old Chantelle started looking for shells while four-year-old Shannon commenced building a sand castle. In the distance we could see a lighthouse and there were a couple of boats out on the water.

That night, we sat under a starry sky, listening to the calming sound of the waves in the background. It was one of those peaceful evenings you remember long after you’ve come home.

The next morning, we jumped in the car to explore the area. Our first stop was the quaint seaside town of Strahan, a place that breathes history. The town was named after Governor George Strahan in the late 1800s and has been the main port on the west coast for more than 160 years.

In the 1900s, Strahan was home to pioneers in search of the sought-after huon pine, which is native to the south-western corner of Tasmania. On the banks of the Gordon River, huon pines were cut down and flushed out into the harbour by winter floods. Boat building was a major industry and the town boasted a number of sawmills.

The town also became the railway port for the rich Mount Lyell copper mine. From Regatta Point, the ore train made its return journey to the mines in Queenstown. The railway line was opened in 1896 to service the mine but was closed and removed in the 1960s. The rebuilding of this historic stretch of rail is an amazing story of community initiative and it was opened to the public in 2003. Today, tourists can experience a riveting 35km ride on the West Coast Wilderness Railway, which climbs alongside steep gorges and traverses an amazing 40 bridges.

The half-day return journey takes visitors across the iconic Abt Railway, which is a rack and pinion system – the first of its kind in Australia. This unique railway enables the train to operate on steep slopes and there are plenty of those in this mountainous area.

Strahan is also known for the convict settlement on Sarah Island, which operated from 1822 to 1833. It was home to some of the worst convicts of the colony, thus earning it the reputation of being Australia’s harshest. The men were set to work to make the prison economically viable and, for a short time, they were part of the largest shipbuilding operation in the Australian colonies.

Surrounded by treacherous seas, it was the perfect location to keep the prisoners from the mainland, though many tried to escape nonetheless – some successfully. Most men were never seen or heard of again and perished in the ocean, most likely. As many as 156 attempts were recorded over a period of six years, with less than half the prisoners surviving.

The most gruesome story details the escape of Alexander Pearce, who was part of a group of eight escapees. After his capture, Pearce confessed to resorting to cannibalism, thus accounting for the deaths of five of his companions.

Another Sarah Island escapee Matthew Brady became a notorious bushranger after his escape and managed to roam the hills and mountains for two years before being caught. He was dubbed the ‘Gentleman Bushranger’ due to his reputation of never robbing women and treating his victims well.

You can enjoy the account of an escape from Sarah Island, told in Tasmania’s longest running play, The Ship That Never Was, at the small playhouse adjoining the West Coast Visitor Information Centre. The 75-minute play is based on a real event and is performed every day from September to May.

Once you’ve done your sightseeing, it is time for an offroad adventure. Jump in your 4WD and head back toward Macquarie Heads. Once you hit the dirt, keep going for about 10km until you spot a sign on the right that says, ‘Lighthouse Track’. Don’t be fooled by the name because you won’t get to visit the lighthouse – a view from Ocean Beach is as good as it gets.

Initially, the track is very rocky but it soon turns to sand. At this point, it’s wise to let your tyres down because it makes for an easier and softer ride. After about 5km, you’re almost there and the roar of the ocean is getting louder by the second. One last sand hill and, all of a sudden, you can see the wild Southern Ocean.

Ocean Beach stretches out for over 30km. Powerful waves pound the coast and it isn’t unusual for the beach to be completely deserted. It makes a perfect playground for kids and there are plenty of sand castles to be built, although swimming is not recommended. When you’ve experienced enough sand and wind, jump back in the car and drive along the beach back to Macquarie Heads before going back to the campground.

Take a trip on the West Coast Wilderness Railway. Fares start from $99 per adult, $45 per child or $230 per family.

Experience the live performance of The Ship That Never Was, performed daily from September to May. Admission is $20 per adult ($15 concession), $10 per student and $2 per child.

If you want to get out on the water, day cruises on the Gordon River make stops at Sarah Island and take in the ancient rainforest along the river banks.

Bush camping is available at Macquarie Heads, 15km out of Strahan. Facilities are limited to drop toilets. For enquiries, ring the caretaker: (03) 6471 7382. Cost is $6 per family, per night. Alternatively, there are a couple of caravan parks to choose from in Strahan.