The road to Birdsville is as bleak a landscape as I've seen in this country. Gibber running into loose gravel tablelands,everything looking freshly washed in floodwaters.

At the end of one station driveway is an entire living room set,complete with wood stove, washing machine, busted television and armchair, resplendently arrayed to take everything in. It lookalike a late Pink Floyd album cover.

Further down the road a sign covered in shoes and thongs juts up from the iron oxide gravel marking a private road and I'm compelled to wonder how it started. If I dropped a thong by the side of theroad, might there be a thong pyramid to show my children in 20 years? These collections that no one owns, curated by the universe at large, are an intriguing phenomenon.

Are they recent artefacts, or have there always been shoe trees,beer bottle ziggurats and ghost lounges? Are these nothing more than post-modern middens, an attempt by our chaos-hating brains to order the entropy of flotsam and jetsam that we've created? A kind of creative self-loathing? Or is it just a bunch of shoes left by bored backpackers…

As you pull into Birdsville, boiling hot artesian water bellows and bubbles out of a bore in the ground and runs off to cool. If most of the people in the outback are running to or from something, this must be what many of them are looking for. Birdsville retains the cast and pallor of a frontier outpost. At the eastern end of the Simpson Desert, it is both staging point and final celebratory destination for hundreds of brave travellers every year. The Birdsville Races single-handedly turn these dirt streets into throbbing hordes of drunken revellers. People flow like water through the pub doors of the infamous Birdsville Hotel and back out into the muddy streets.

The local copper, Tim Farran, says he moved out here to be a part of the community, not another inhuman robot in the city arresting teenagers to appease business owners. Out here he can shoot out into the desert, and there's a potent connectedness to the people he lives with. "There are no bad people, just good people in bad situations."

At the bakery Dusty Miller, the proprietor and self-taught baker,serves us camel pies that are delicately crusted and absolutely delicious. There are kangaroo and claret pies on the menu, and I leave with a couple of apple and lilly pilly pies for the road.Dusty says the secret to a good pie is having a passion for the fillings. He's boiling a massive pot of lamb shanks in the kitchen for his next recipe, which will take a few weeks of perfecting before it is perfect.

Out at Big Red, it isn't a hard decision to set up camp right at the top. The Simpson is still closed and there's a massive lake east of the giant dune, so there's no through traffic at all. The orange sand gets into everything, but it is worth it to watch the sun set over the muddy valley to the west. Birds swim in the lake all night, you can hear them calling and splashing in the starlight. The stars reflect on the still water and there is no end to the night sky. It seems like you could take a step off the dune and drift away.

Sunrise over the temporary lake was breathtaking. I drive into town to catch up with Brian Hanna, who manages the Birdsville Hotel. He tells us how he ended up out here. He was driving a truck in Brisbane, sitting on the pavement in front of his truck in one of those interminable traffic jams. He had a coin in one hand and decided that, if it came up heads, he would just leave. Tails he would stay and try to make this life work. The coin came up heads and he hit Birdsville with the money in his wallet and a change of clothes - inspiring stuff.

With a roaring fire at the top of Big Red, the night sky comes alive, framed by the rippled red sand that glows in the light of the stars. There isn't another human being and the solitude,coupled with the spinning stars and the far off ripple of the lake,make this one of the best spots I've ever camped.

Heading north to McKinlay, we hole up in a paddock near the old Hamilton Hotel ruins. Needle bushes and grass seeds get into everything, but it's about now that the true, small joys of living out under the stars begin to sink in. Eating food cooked over an open fire, or buried in the coals, every night. A beer at the end of a day spent driving in the glare and haze of the desert sun tastes twice as good as any beer I've ever had at a backyard barbecue.

Brian at the Birdsville Hotel made a great point, saying that out here you can run away from everything but yourself. You have to be honest with yourself, you can't wear a mask. It doesn't work. It falls apart. The masks melt when you're living this intimately with the few people around you.

In McKinlay, the Walkabout Creek Hotel is a dim copy of a palenostalgic moment, a mixed up memory, like a birthday cake made from raw meat. Across the street, though, is the McKinlay Roadhouse, as fair dinkum as the Walkabout isn't. Most truckies wear stubbies,but up here they are shorter than ever. The 24 hour diner has a steady stream of bearded drivers flanked by literally hundreds of photos of road trains tacked to the walls.

Back on the Landsborough Highway, it's depressing to note that the'Toyota wave' is gone, that one-fingered salute you get once you're truly out the back. Leaving the dusty, corrugated Red Highways behind, I feel a sense of loss. There are fences on the sides of the road to keep the cattle in, but I feel like it's me being-fenced, not them. Wedge-tailed eagles as tall as full grown wallabies stand by the roadside. A bush camp at Firey Creek, on the way to Gregory Downs, is nondescript. Cows bay all night, the gums are stunted and the night sky doesn't care that I miss the dirt roads.

I wanted to hang out at the Burke and Wills Roadhouse, but when we got there it felt staged, like an old west museum. The wood was too shiny and the guys drinking at the bar were as strange to the bartender as me.

Back on the dirt to Burketown and almost instantly a 1983 LandCruiser ute with two old guys in Akubras passes me, both of them wave. Cattle on the verge are in rut and the horizon is aruler edge barely broken by a shimmering mirage of distant trees.When cars pass the dust hangs in the air, motionless.

On a whim, I cut back southeast to Leichhardt Falls and roll in after dark. The roar from the falls upriver is soothing. At dawn the view is serene black water flowing from a rushing white waterfall. The water is icy cold, but so worth it. Who needs a bath when you have this?

Unlike touring some of Australia's better beaten regions, outback Queensland affords the slow traveller a freedom from fixed dates.Most of the campsites are big enough, and there are a million paddocks to pull into, so you're rarely crowded. A fire every night, no noisy neighbours, a bush dunny as big as the sky and it's all free.

My last stop on this northern sojourn is Hellsgate Roadhouse just before the NT border. Following the Savannah Way from Burketown,the roadhouse is a pretty nondescript joint overlooked by Bill Olive. It has been closed and reopened over the years, but things look to be running well these days, and he was planning on getting Eftpos facilities within the week.

There's a massive barbecue area off to one side of the roadhouse,with a life-sized coffin esky. I guess that makes sense out therefor some reason. Bill has been here his whole life, and the lines in his face echo the erosion the land endures each wet. To Bill the outback doesn't exist on any map, it's about the interaction between man and landscape. It's the big sky country, and the no people country. In a way, it's different for everyone, but you always know when you're there, and miss it terribly when you aren't.

At Dilldoll Rock, I watch shooting stars cut the night sky into vast slices. Venus rises two hours before the sun, the morning star, lighting up the rocks with its pale yellow glow. You live by this celestial clock once you've been out here for a couple of weeks. You can point to any cardinal direction without thinking,any time of day or night. You get a feeling for where the planet swill rise and when, and you begin to measure days by the phases of the moon, by how close to the horizon the milky way is, and dawn becomes the first faint glow on the horizon, not the too late blast of the sun on the side of your tent.

For eons, we lived under this constant reminder of the passage of time, of the cycles of the world we live in. We've lost that connection, that ability to look up and know and understand so much about, not the heavens, but where the earth is in her cycles, where we fit into that.

For me, that's what I carry home from a trip into the interior of this ancient country. A sense of scale, a rearranging of priorities and a connection with the people who have learned to make this place home, who are lucky enough to live under that rising and falling milky way every day. 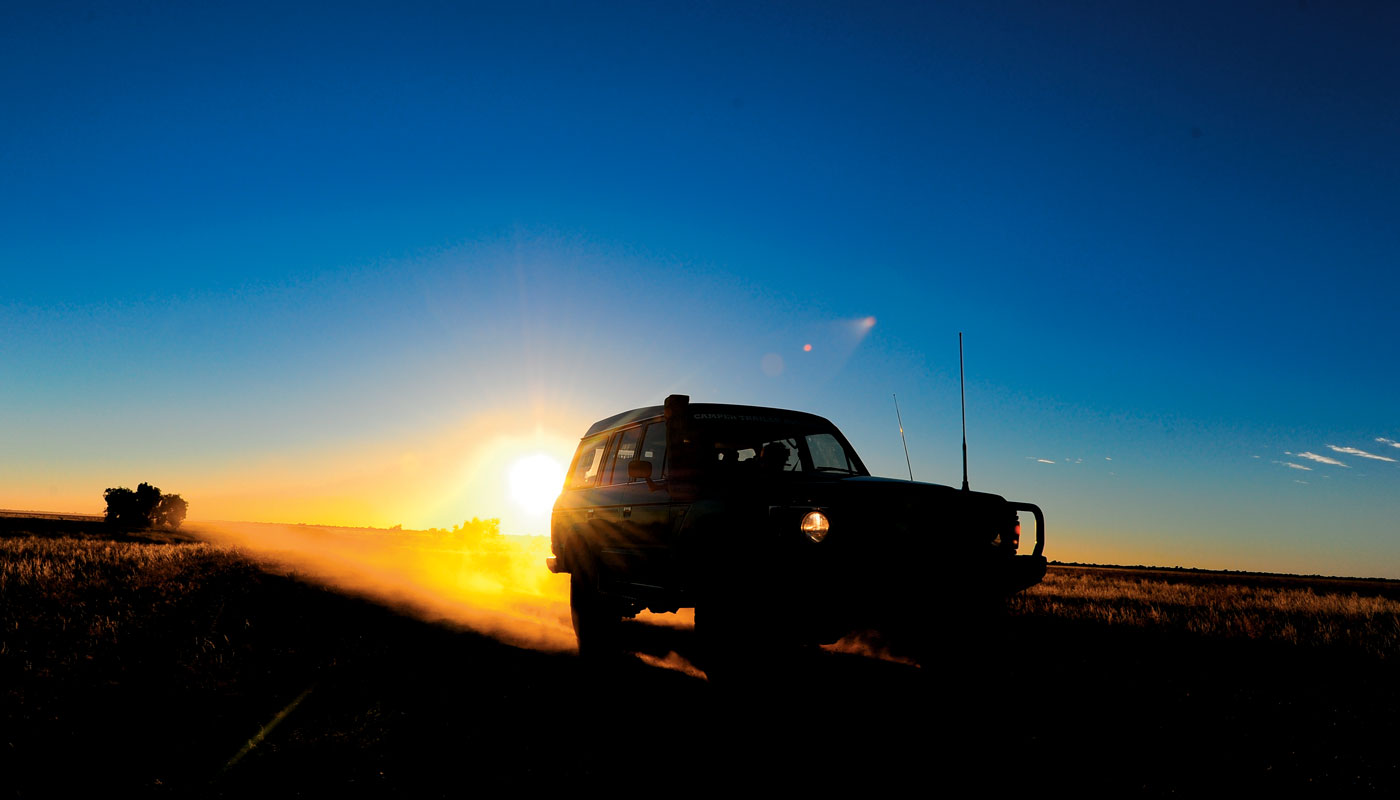 Camping on Big Red is not something you'll get the chance to do most years, as the traffic from and to the Simpson can be fairly heavy. But if you're lucky enough to rock up when the Simpson is closed and there's a lake on one side of the super dune, there's nothing stopping you.

In between the dunes is also good, there is less wind, and if you're observant there is firewood out here. On a busy day, it can be great watching people try to scale Big Red with full tyre pressures, but with nice low pressures, you should be able to get over on the first try with a camper trailer. Low pressures and a bit of momentum. Just make sure everything is tied down.
No permits are necessary to camp here, but you do need park permits to travel further west into Simpson Desert National Park.

Just west of the Hellsgate Roadhouse is a crown of rock perched by the roadside called Dilldoll Rock. A favourite camping spot with the locals (evidenced by the VB midden), it's a quiet spot to camp and you can climb the rock for some unbelievable views of the surrounding country, basked in green gum leaves and distant red bluffs. There are no facilities, but that only increases the charm,as you'll probably have the place to yourself. Just look for the big rock on the right and a couple of rough tracks that head off.