We arrived at Yulara Campground (the only camping option near Uluru) via the Great Central Road. We’d had a great run from Perth in our LandCruiser 200 series, towing our Australian Off Road Odyssey Export Signature camper trailer. There was very little traffic, just a few passing trucks followed by blinding clouds of
billowing red dust.

Kangaroos, brumbies, eagles, emus, camels and racecourse goannas appeared regularly enough to keep us all entertained. There were also old car wrecks at regular intervals along the verge — some were ancient (we spotted a Morris, a Kingswood and a Valiant Charger), while others were more recent. Obviously tow trucks don’t come out this way!

We took a leisurely couple of days to traverse the Great Central Road and overall it was in pretty good nick. It is an ever-changing stretch of red gravel, or white limestone, or red dust — with a good dash of corrugations thrown in. But this can change dramatically after any rain. The couple running the Tjukayirla Road House told us the previous week they had only 3.2mm in the gauge but that a truck heading west had gone into a dip where the water was so deep it washed over his bonnet! The further east we went the worse the roads became — narrower with more dips, crests and corrugations. 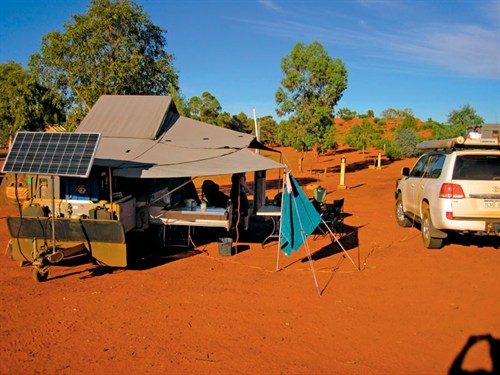 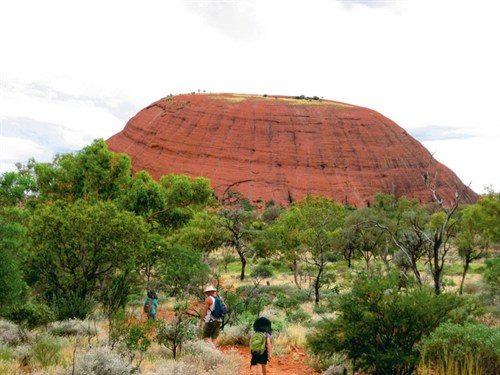 Road signs in the NT are a bit erratic — sometimes they are there, sometimes they aren’t. Drivers are warned of small undulations by “Dip” warning signs but some that would be at home on a roller coaster are completely unmarked.

Diesel and Opal are available at regular intervals along the road. Opal is the unleaded alternative which is used to deter petrol sniffing — we felt it had less guts than regular unleaded, but it got the job done.

You come off the gravel onto the bitumen in sight of Kata Tjuta (previously known as the Olgas), which provided a lovely backdrop as we stopped to air up the tyres. We drove through to Ayers Rock Resort and our campsite. As it was not peak season, there were only about eight other sites taken. There wasn’t any natural shade available so we added on the annexe extension pieces when we set up. The sun was so bitey we even pulled out the Supa-peg annexe on the Cruiser for more protection. With camp set up we headed to the pool for a welcome swim before our much anticipated Uluru sunset.

We arrived early at the sunset viewing area, parked the Cruiser, set up the table and chairs, and settled down with a bottle of white, some cheese and crackers — bliss! The camera was mounted on the tripod, framing the picture perfect view, ready to capture those amazing colour changes. We chatted quietly with other like-minded travellers, who had gathered to share this magic moment, as we waited for the sun to sink in the west. All was set for a perfect evening.

Then, just before the sun set, it all went rather pear-shaped. A mini-bus pulled up and a big group of young Japanese tourists disgorged and imposed themselves right in front of our table. They were all talking away at the top of their voices, taking millions of photos in a range of weird setups (like pretending to hold Uluru or taking pics of their dolls enjoying the scene), and generally making an absolute nuisance of themselves. The peaceful atmosphere was shattered. They were oblivious to their impact on those around them as they milled up and down the fence-line, blocking everyone’s view. When one of them knocked Mike’s camera and tripod I hid the cheese knife as I had visions of tomorrow’s headlines: “Cheese Knife Massacre at Uluru”.

Even so, the changing colour of Uluru as the sun sets is awesome. I’d always suspected the photos displaying such dramatic colours may have had help from Photoshop, but they don’t. It really is a sight worth seeing — in our case just be grateful the photos don’t come with audio!

The next day we went to the rock for a closer look. The “to climb or not to climb” debate still rages strongly but we were spared the decision as the track was closed for the summer, when temperatures regularly soar into the high thirties.

We decided against doing the loop around Uluru, instead doing the Lungkata and Kuniya Walks (about 5km return). The rock is far more contoured up close than it appears from a distance— it is full of fissures, craters and caves. The colour is an amazing vermillion red, set off by the surrounding green Australian bush. We walked around to the only permanent water hole and there was still a little water running from the rains a few weeks prior. There is also some clearly signposted indigenous art on a nearby rock face.

On the way back to camp we drove the road circuit that loops around the rock, the lazy alternative to the Base Walk. We then had a quick look at the Cultural Centre and headed back to camp to cool off in the pool.

We woke early to warm but cloudy skies and were on our way by 8.30am out to Kata Tjuta (pronounced ka-ta-joo-ta). We had our daypacks loaded with plenty of water, survival rations of lollies and biscuits and our FOF nets were at the ready. These fly nets are brilliant, keeping you sane in the outback where there is an epidemic of flies and yes, the name stands for “F-off flies”.

We chose The Valley of the Winds Walk (if predicted temperature is 36°C or higher it is closed from 11am, so start early). We made it to the Karu lookout very quickly, continuing on took us between the Olga domes and was spectacular. The deep red domes tower above, offset by the lush green bush and small pools of water.

Next is Karingana lookout which has a nice view, though the scenery getting there was the real highlight. From here you decide whether to turn around or continue on the slightly longer loop route, which looked a bit flatter overall. We continued on while the clouds got darker and we could hear thunder. There were a few raindrops — then the wind got up and started blowing a gale. We raced the last kilometre back and made it back to the car just before it bucketed down. We were all totally exhausted. Even though we drank regularly and there are water stops along the way to top up the water bottles, dehydration is really an issue — you just can’t drink enough. The overall loop was 7.4km and it was reasonably hard going. There are scrambles up rock faces, very steep hills and some paths were like a pebble river bed. But the kids (seven and eight) managed fine.

It continued to drizzle all afternoon, so our extensive shade annexes became rain shelters. That night, around 11pm and again at 5am, big storms came through. There was rolling thunder, spectacular lightning and plenty of rain. It was one of those “be careful what you wish for, it might come true” moments, as we got to see Uluru in a thunderstorm.

Travelling out of peak season had the benefits of much thinner crowds, but there is something fundamentally wrong about it being 38°C at 9.30pm. But whatever time of year you can escape, add Uluru and the Olgas to your must-do list, they are iconic destinations for very good reason.