What do you know about the Burke and Wills Expedition?

Have a chat around a campfire with a few overlanders and history buffs, and there’ll be plenty of people who can outline the story:  The expedition’s departure from Melbourne in August 1860, the roadsides swelling with locals eager to witness the cavalcade. The party splitting at Menindee, and then again near Innamincka, where just four men, a hand full of camels and Billy the Horse left  the banks of Cooper Creek to push north for the coast. The explorers never quite reaching the sand-fringed ocean that they’d imagined. Finally, three weary men returning to Camp 65, four months later, only to find the depot empty and their colleagues departed just 10 hours previously.

However the story unfolds around the campfire, chances are that the enduring image will be of three dejected explorers at a deserted camp with the lonely inscription on a Coolibah tree telling them to DIG to find supplies. 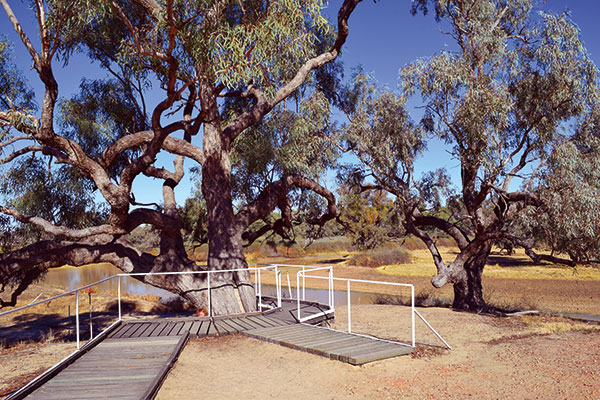 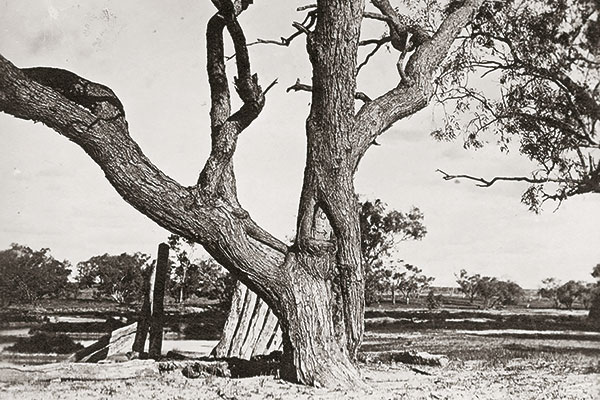 So, this iconic tree would be worth a photo, right?  Absolutely. In fact, you may be among the thousands of people who’ve stopped at the Camp 65 site to grab some selfies around ‘the DIG Tree’. Well if you have, you may need to go back. You see, you probably took a photo of the wrong tree!

Preparing for a recent trip retracing the route of the Victorian Exploring Expedition, we did a lot of background reading and talking with ‘those in the know’.  Surprisingly, when it comes to ‘the DIG Tree’, not all accounts of history are the same. While everyone agrees there’s a tree blazed with the word ‘DIG’ at Camp 65, the question is: which tree?  You see, two trees at the site were blazed with the same word. And there were in fact six blazes with various inscriptions on trees in the same vicinity. In most cases, the markings have deteriorated to the point that they have been barely recognisable for years.

On our trip we figured that the uncertainty would surely be sorted out when we arrived at Camp 65.  So after setting up and settling in, we jumped onto the Ranger’s tour and talk. But we were left with more questions than answers.

The bloke giving the talk at the DIG Tree reckoned that the mob who’d erected the information boards at the gates to the site ‘wanna re-write history’ about which tree we should all be paying attention to. Which sounded a bit odd to us, because the info boards he was talking about were put there by the Burke and Wills Historical Society and Queensland Tourism.  And they sounded like people who ought to know what they were talking about. So, why all the conflicting opinions? Surely there’s been enough reliable information recorded about ‘the DIG Tree’ in the last 160 years to keep things fairly straightforward?

The trouble is that, ‘back in the day’, no one was particularly bothered about the location of the DIG Tree. Popular imagination and reverence centred around Burke’s grave site, which is 60km by road back towards Innamincka.  The site of the DIG Tree was privately owned from 1873 when a 21-year-old bloke called John Conrick established a property there. While he knew about the blazed trees by Cooper Creek, a decade later the marked trees were already beginning to heal.  And by 1898, when the first known photo of the tree was taken and published in ‘The Queenslander,’ the blazes had really started to grow over.

In 1929, a wedding was held under ‘the DIG Tree’ which was the first time the Coolibah we stand around today was referred to in those terms.  The romance around the site was fuelled by the 1937 Frank Clune novel Dig: A Drama of Central Australia. While this book contained many factual errors, its reference to ‘the DIG Tree’ increased popular awareness that the site existed.  In the same year, a cairn was erected adjacent to the tree. And, because some of the blazes were by then illegible, the plaque includes the words that John Conrick remembered seeing on the tree based on his boyhood recollections. The question is, how well did the 85-year-old Conrick remember what he’d first seen engraved some 64 years previous?

While the site was gazetted in 1964, it remained unprotected from cattle, humans and cars until 1988 when a chain fence was placed around one acre surrounding the trees. In 1994, the Army erected a boardwalk to further protect the DIG tree and its life sustaining roots from further compaction and damage.

Looking more closely at the historical material and walking the ground, it became pretty clear to us that there are other ways to look at the cluster of Coolibahs standing by Cooper Creek that were being trampled around by legions of tourists.

You see, the person who made the original inscriptions at Camp 65 actually made three blazes on two trees at the site.  His name was William Brahe. He was the Depot Commander responsible for tending to the men and camels waiting for Burke and his three fellow explorers to return.

In evidence to the enquiry into the deaths of the expedition members just six months after later, Brahe said that he buried a camel trunk under a tree with supplies in it for Burke if and when he returned.  Brahe’s original orders were to stay at Camp 65 for three months and then to head back to the Depot Camp at Menindee. At the time, the possibility existed that, having reached the north coast, Burke would arrange to hitch a boat ride back to Melbourne.  So there was no need for Brahe and his men to hang around Cooper Creek forever. To his credit, Brahe maintained the camp at the Cooper for an extra month before burying some supplies and, ironically, leaving the site on the morning of the same day that Burke, Wills and King (less the deceased Gray) finally returned.

Brahe told the Enquiry that, before leaving the site, he blazed a tree with the letter ‘B’ for Burke and the number of the Camp in roman numerals LXV underneath it. This blaze is still readable because of human intervention to stop the scar from growing over. On the same tree, he gave evidence of having made a second blaze indicating the dates of the Camp’s occupation. This read ‘DEC 6 – 60’.  Under that he marked ‘APR 21 – 61’. This is today’s DIG Tree.

But the Coolibah that Brahe marked with the word DIG was not that same tree.  Brahe told the Enquiry that he marked the word ‘DIG’ on a different tree outside the stockade.  Brahe described the tree as being the place where the Depot Party had tied-up its horses. And that tree is 10 metres to the west of the Coolibah that most people stand around today.  Indeed, after all these years it’s still possible to identify the waist height branch on this tree that would operate quite effectively as a John Wayne-style hitching post. It’s at this tree that Brahe confirmed to the Enquiry that buried the trunk.  So, this is the ‘real’ DIG Tree.

So did anyone actually scratch the word ‘Dig’ on ‘the DIG Tree’?  Well, yes: but he wasn’t part of the Burke and Wills expedition.

You see, after hearing about the disappearance of Burke and Wills, no less than five rescue parties were sent out looking for the explorers. Alfred Howitt was the leader of the party who found the remains of Burke and Wills and he made a camp across the river from where he found and buried Burke. Alexander Aitkin was Howitt’s storeman and he left a note in a bottle buried at Burke’s Depot Camp to inform any other of the rescue parties who may come that way that where they were.  To indicate its location, he blazed the same tree on which Brahe had marked the Depot party’s date blaze and Camp number (today’s DIG Tree). And what inscription did Aitkins leave on the tree? Well, it read:

We know this because, in 2008, the President of the Burke and Will Historical Society, Dr David Phoenix, found Aitkin’s diary in a library. And in it, Aitken recorded “I marked the tree that had the date blaze and camp number blaze”.  So the word DIG does exist somewhere under calloused bark on ‘the DIG Tree’. But, for our money, it’s pretty clear that no-one from the Burke and Wills expedition put it there.

So, now you’ve got to ask yourself.  Is about time you went back to Cooper Creek to take some new photos?