You just can’t beat a good old-fashioned offroad adventure. Seriously, those bright starry nights and majestic sunsets are enough to make a grown man cry. Chuck in the glow of a toasty warm campfire and the smell of some tucker gently roasting away and you could be forgiven for calling in sick at work for a few extra days of premium paradise — not that I’ve ever done that, hey, boss?

But, as good as all of the above sounds, getting to the best campsites in the country definitely has its challenges. And battling clouds of dust for days, weeks or months on end is, without a doubt, one of the most frustrating. But here at CAMPER, we’ve tackled literally thousands of kilometres of dusty corrugated tracks and picked the brains of some of the best in the industry to bring you the top tips, tricks and techniques to deal with dust. 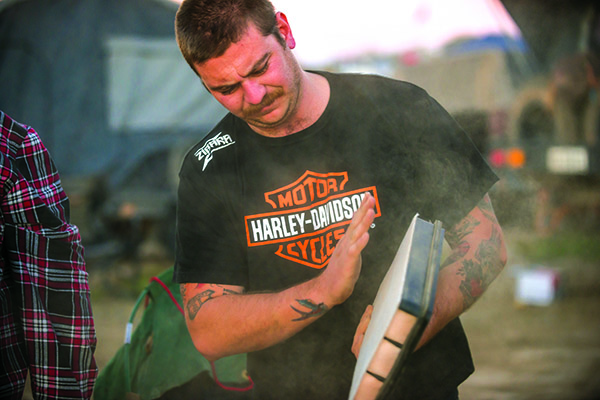 Most true offroad camper trailers these days are considered pretty much dust-proof but, let's face it, things don’t always go to plan. So it’s worth working on a plan B when it comes to the packing side of things.

What can you do? Well, the simplest trick in the book is to add another layer of protection, and a good way to start is to pack your clothes in plastic bags inside your main bag, storage tub or cupboard. The reusable, sealable bags are the way to go, but almost any bag will get the job done while helping to keep your clothes a little more organised in the process — geez, talk about killing two birds with one stone!

While you’re at it, items like cooking utensils, electronic equipment, tools and food can all be stored in plastic food containers, too. Oh, and here’s a tip, try and avoid using bags with poor quality zips to store items away — the dust will jam them up quicker than you can say supercalifragilisticexpialidocious!

Grease is a major part of keeping things lubricated and moving freely, so giving any grease nipples on your 4WD and camper a quick squirt with the grease gun kind of makes sense, eh? If you thought all it did was reduce friction and keep things moving, I’ve got some news for you. You see, it does a heck of a lot more than most people realise. It protects internal components against rust, and creates a barrier/seal to help keep dirt, water and debris out of vulnerable areas. For those that are about to tackle a lengthy offroad trip, do yourself a favour a bung a grease gun in your tool kit — it’s well worth having on board. Pay particular attention to things like your offroad coupling, and your 4WD’s tail-shaft universal joints, which both have a tendency to dry out after driving water crossings and dusty tracks.

Dust and dirt has a nasty little habit of getting into absolutely everything, especially your electrical gear. No big problem, right? WRONG! Over time, it can really start to cause problems. From clogging up and restricting moving components to facilitating rust when you throw a little moisture into the mix. So, what can you do? Let’s start with the magical world of compressed air. It would have to be one of the quickest and easiest ways to keep things squeaky clean. The vents on your fridge, along with electrical plugs and sockets will absolutely love a quick burst of fresh air. But why stop there? Give the tent zippers, window tracks and fridge slides a blast, too. Heck, a bit of compressed air is enough to retire your every day cloth and broom for good!

The problem with corrugations is they have a nasty habit of shaking six shades of you-know-what out of your vehicle. Apart from rattling your dentures to pieces, they can actually reduce your traction dramatically as well, thanks to the wheels almost bouncing off the ground. But there are a few little tricks of the trade that can help smooth out the bumps.

The best and most obvious is to lower your tyre pressures. Not only does this help avoid damaging the track, it offers more comfort and increased traction. But working out the ideal tyre pressure is often easier said than done. Too low, and you’ll build heat and shred the tyre to pieces. Too high, and you’ll get bounced around like a jack in the box. There’s a clear correlation between tyre pressure and speed, too; the less air in the tyre, the lower your speed should be to avoid building heat and to account for diminished handling. If your tyres are getting too hot as you drive, add some more air (say 4-5psi at a time) and recheck it after a few more kays.

Most drivers will slow right down and look for a smoother line on the rougher sections of track, only to be overtaken by a local on a mission as he/she comes blasting past. It might look crazy, but there’s often a method to the local's madness. You see, depending on the size of the corrugations or, more accurately, the distance between each dip, you can find a speed that allows you to ride along the tops of each corrugation instead of bouncing in and out of each one. The bigger the gap between each one, the faster you’ll have to go to stay on top. But I cannot stress enough the importance of ensuring you stick to a safe speed. Think about it – for every metre of track you travel, the wheels literally only touch the ground for half of it!

A good layer of dust is enough to block and reduce the amount of sunlight that gets through to each solar cell, so it’s important to keep your solar panel nice and clean. You could give it a wipe with a damp cloth in a big wide circular motion like most people do, but did you know rubbing a cloth over the tempered glass can create a static charge, which attracts more dust? The worst part is that it’ll stick to your panel like bubble gum to a boot! The best way to clean it and keep it that way is to use soapy water and wipe it with a straight motion from one side to the other, than give it a quick shower of water. But, hey, if you do get some static make sure you give the closest person to you a quick zap for fun!

Ok, so, you’ve noticed dust has worked its way into your camper. The big question is, why? Is the seal damaged? Are there gaps? The most common reason is the door latch is simply adjusted too loose, thanks to those bumpy tracks rattling the adjusters out of position. Most seal designs require pressure on the seal itself in order to be effective. The trick is to nip it up, not to the point that it distorts the seal, just nice and firm. If that doesn’t work, the door adjustment itself might be out. How do you fix that? Well, how long is a piece of string? There are literally hundreds of door hinge designs out there and most of them have their own adjustment procedure to adhere too. But, as a general rule of thumb, start by slightly loosening the adjusting screw/nut off so it still holds the doors in place, and gently tap it into the correct position.

Nothing says epic adventure like clouds of bulldust and a dirty brown tinge to your trusty 4x4! While hitting patches of the brown fluffy stuff can look great for that outback happy snap, it can cause more problems than it’s worth. Why?

Well, let's start with the amount of dust that will inevitably find its way into any crack, crevice or hole in your setup. Then there’s that obvious lack of traction, the potential of the dust hole being deeper than expected and the tendency for the entire vehicle to get pulled off-course, causing a swaying motion and sending you rocketing towards the nearest tree. Doesn’t sound real smart, eh? Nope, if there is a way around it – take it. If there’s not, then slow down. If your vehicle jolts around a bit, avoid aggressively swinging on the wheel like a monkey as this can easily lead to an over-correction and a big problem. Instead, ease off the throttle and it should guide itself back into shape, although it may need some gentle guidance.

The trusty metal jerry can might be just about bomb-proof but, when it comes to keeping dust out of your water on those lengthy dirt roads, it’s a little behind the eight ball. The good news is there’s a simple fix: simply cut a piece of foam or rubber out to place on top of the opening and close the lid nice and tight. You can use the same method to help seal up old tool boxes and plastic tubs, too.

Well, if that doesn’t help you tackle those dusty dirt tracks, nothing will! It’s worth saying that travelling Australia is a super popular thing to do these days. That means there are often quite a lot of drivers on otherwise remote dirt roads, and many of them are inexperienced! So keep your eyes wide open, be patient and drive with as much common sense as you can muster up!