While South Australia is notorious for its searing summer temperatures, Kangaroo Island (or KI as it is known to the locals) is several degrees cooler, promising a gentle reprieve. And with some seriously hot January weather on the way, a week or so on KI seemed like a good idea. However, the heat arrived earlier than expected and, with our camper trailer loaded to the gunwales, the Prado found the trip from Melbourne hard going in the 46°C heat.

Struggling against a ferocious northerly headwind, the automatic transmission temperature crept perilously higher every time our speed exceeded 90km/h. Anxiety levels remained peaked as we passed through the dry South Australian mallee country on one of the hottest days on record, with bushfires uncomfortably close on either side of the road. It was only upon reaching the South Australian coast south of Adelaide that an evening thunderstorm provided some dramatic and temporary relief from the oppressive heat.

Access to Kangaroo Island, just 14km off the mainland coast, is by ferry. Surprisingly, for such a short trip, the cost of a return ticket for a vehicle and trailer plus two adults and two children came in at a whopping $648. On the bright side, it was a refreshingly enjoyable voyage with dolphins frolicking in the water, pacing alongside the ferry as they seemingly escorted us to the island. As we pulled into the port of Penneshaw, true to its reputation, the temperature was refreshingly 10°C less than the mainland just 30 minutes behind us. 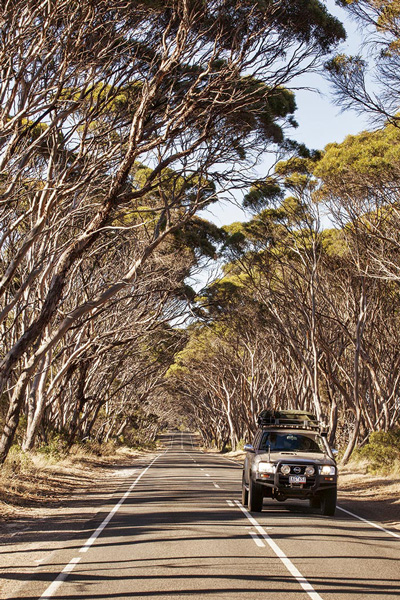 KI narrowly missed becoming a French colony after it was circumnavigated and mapped by the French in the early 1800s. About the same time, Matthew Flinders landed here and reported in his journal: “The whole ship’s company was employed this afternoon in the skinning and cleaning of kangaroos”.

After four months privation, they stewed half a hundredweight of heads, four quarters and tails down into soup for dinner. No prizes for guessing how the island got its name.

Seal Bay, on the south coast, is home not to seals, but a large colony of Australian sea lions. Access to the beach is by guided tour only and, while a family ticket will lighten your pocket by $80, this is the best place in Australia to see these beautiful creatures. Sea lions come to KI to breed and in summer the beach is covered with mothers and their pups interspersed with larger belligerent males feelin’ the love and on the lookout for mates. Sea lions travel up to 100km offshore and, when fishing, they might dive to depths of 275m up to 1200 times over a three-day period before returning to the island to rest.

Other nearby attractions are the Birds of Prey show at the Raptor Domain, and Little Sahara, a striking 2sq km area of bare white sand dunes where the kids can go sandboarding. Also close by is Vivonne Bay where the campground, well sheltered from the prevailing winds that can howl in off the Southern Ocean, is a great place to pull up for a day or two.

A little further west is Hanson Bay, where a cluster of holiday shacks line the shores of a truly picturesque bay with inviting azure blue water and a pristine beach of brilliant white sand. Perhaps best of all, despite it being school holidays when we visited, the beach was entirely deserted. Hanson Bay is also the site of the exclusive Southern Ocean Lodge where a minimum two-night stay for two people costs from $4000 to $7000. The Lodge isn’t one for the Great Unwashed, describing itself as ‘Australia’s first true luxury lodge’ – and, with prices like those, who wouldn’t expect the emphasis to be on luxury and exclusivity?

At the western end of the island is the 33,000ha Flinders Chase NP where the Rocky River campground has to be one of the most pleasant camping areas anyone could hope for. The thick native bush that separates the individual campsites hides a truly enchanting resident – the Tammar wallaby. Not much larger than a cat, with big appealing eyes, they win many hearts as they scavenge around campsites looking for food scraps. Because of their endearing looks, I’m sure many Tammars get some handouts as well – despite it being against the rules. Less popular denizens of the bush are the brush-tailed possums and occasional rat, both of which have a penchant for night time raids on rubbish bags and unlocked food containers.

Harveys Return, 4km from Cape Borda on the north-west tip of the island, is another delightful campground with its eight designated sites protected from the elements by the overarching embrace of twisted and entwined sugar gum branches. Superb fairy wrens flit around campsites searching for the odd crumb and occasionally a scarlet robin, with its bright red chest plumage, can be seen in the surrounding bush. Facilities comprise a pit toilet and, in the warmer weather, camping somewhat removed from (and preferably upwind to) said facilities is recommended.

The Cape Borda lighthouse is not quite what you might expect, being short and square instead of tall and cylindrical. Set atop the high cliffs, it didn’t need to be tall to be visible and while it is the shortest lighthouse above ground level in Australia it is the highest above sea level. One of only a handful of operating lighthouses in Australia, its 1000W light is visible for 40km out to sea.

In days gone by, if a ship’s clocks didn’t keep accurate time, they ran the risk of running aground due to miscalculation of their position. To allow ships to check their clocks, some land-based locations would fire a cannon at 1pm each day. Cape Borda still fires its cannon – but solely for the benefit of tourists. Mick Rosewarne is the local ranger and the price of his tour is worth every cent just to hear Mick’s banter. Mick’s been doing this job for years and, while it could just be part of his performance for the tourists, it’s possible a degree of enjoyable eccentricity has been brought about by years of living in this secluded location!

On the way back to the mainland, while watching Kangaroo Island slowly recede into the distance behind the white wake of the ferry, I was reflecting on just how many attractions this largely unspoilt island has to offer visitors. Perhaps the cost and inconvenience of KI’s ferry access has some benefits in keeping the masses away and ensuring the island’s quiet lifestyle will be around for a while yet.

Kangaroo Island is 14km off the South Australian coast via ferry departing Cape Jervis on the tip of Fleurieu Peninsula, 100km south of Adelaide.