Over the past decade, the camper trailer market has been engaged in an arms race, attempting to squeeze ever more features into the confines of what was once little more than a fancy box trailer. The upshot has been ballooning weights and expanding dimensions, sometimes leading to a loss of manoeuvrability and freedom in the bush unless you have a larger 4WD. Blue Tongue Campers’ response? The Overland XFS.

The Blue Tongue brand has rapidly outgrown the available factory units at its old address at Kirrawee in southern Sydney and has moved into a large new factory with nearby showroom and much greater work room and storage. What started as a quite successful, all locally-built operation, offering Australian or Chinese tents on locally-built trailers, has developed into a business handling totally imported campers.

That success has come on the basis of constantly trying to offer something better. Blue Tongue offers campers with options like the Redarc BMS30 battery management system, or its own hot water and heater setups, along with all Australian gas plumbing and much of the electrical systems. There is a constant flow of upgrades and new ideas, the latest of which is the Overland XFS. 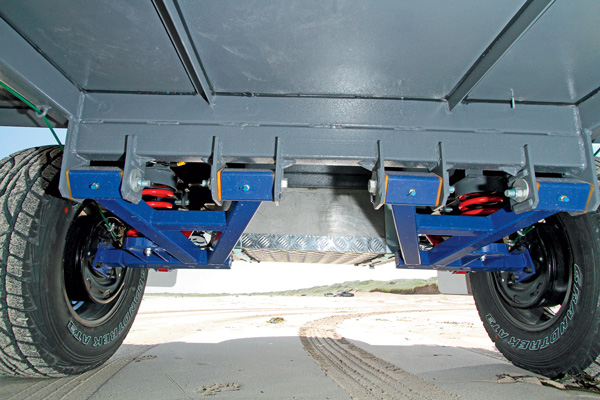 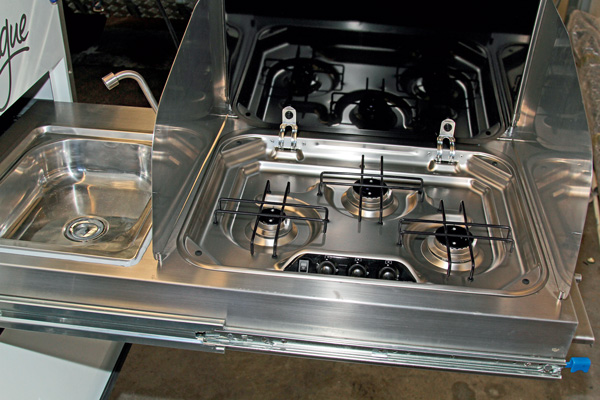 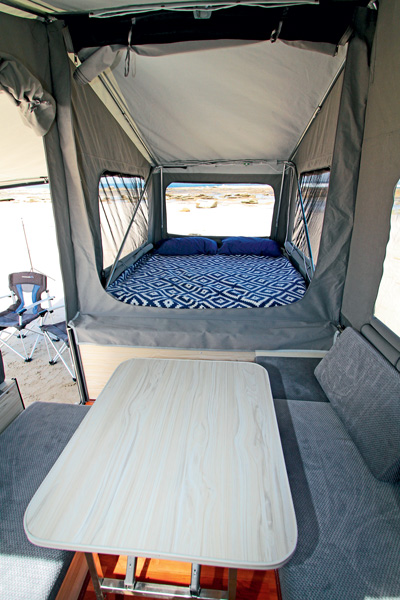 The inspiration for the new model is the Overland XF: one of Blue Tongue’s better selling campers. It is built around the now extremely popular forward-folding design. But the guys at Blue Tongue, working from feedback at shows, perceived a market niche for a smaller and lighter camper. Many potential customers were leery of campers with more than 1000kg Tare and were unwilling to exchange their current vehicles for a bigger, heavier (and thirstier) 4WD just for the occasional camping trip.

The ideas just seemed to fall together. Why not downsize one of its more popular sellers, while retaining most of its features? The result is the XFS – S standing for small.

The result is, as they said of Mary Poppins, practically perfect in every way – with just a couple of shortcomings, some of which are currently being winkled out of the design.

There is no winch for cranking the top, as Blue Tongue figures the XFS is light enough for many campers to lift it over with ease.

You still get a laser cut, fully welded body finished in white two-pack paint. All hinges and fasteners, as well as dress items such as guard flares, are stainless steel. The fan-assisted front box is much smaller, and limits fridge size to about a 50L Waeco, compared to the capacity of up to an 80L Waeco in the XF. All tent poles still travel in a cross-trailer locker behind.

The gas and water must be reconnected, via bayonet fittings, each time you set up. Water is delivered from the 100L 304 grade stainless steel tank via an electronic pump. That said, Blue Tongue assembles its own diesel hot water and space heater for a very modest $2500 (included in the price quoted here), so the workload around the kitchen is reduced.

Blue Tongue has done its best to overcome the storage issue with several bays down the driver’s side of the trailer, one to house the electronic controls and another behind the front box, opposite the void for the poles and the optional fridge.

Other storage is limited to a space under a seat in the lounge, which is partly occupied by the battery, canvas and other basic items. This space is not accessible while on the roadside without opening the camper, either, due to a gas strut on the passenger side that’s used in setting up camp.

The bed is a camper queen-size foam mattress, and has both a privacy screen and mesh walls at the foot. There is an LED strip light above the bed head to go with that at the far end of the lounge. The smaller body size of the XFS is apparent around the fold-up centre table, where legroom is reduced; although, if the table is placed closer to the lounge, it’s comfortable enough for two. Alternatively, you can dine outside.

Set up is pretty quick and easy, with just two spreader bars to be inserted and a few tent bows to be adjusted out to full extension. All of this has produced a camper with definite offroad capabilities.

The lighter weight and smaller size would make it easier to get out of a bog, over a sharp shaly hill, round a tight bend. But, as in all things, change brings compromise, and the smaller size has cut into storage capacity, forcing you to carry some items in the tow vehicle or in tubs on the floor. If you can accept those factors, this is a camper that ought to take you a long way, on or offroad.

The kitchen remains all stainless, and comes equipped with a three-burner Smev cooker and stainless steel sink. The large wind guard around the cooker does tend to cramp the sink, making access difficult and limits the food prep area to just the pull-out shelf at the outer end. There is a large LED stalk light at the sink but no cutlery drawer, so you’ll need to carry your utensils elsewhere, imposing a load on one of the forward fold design’s biggest limitations: the shortfall in storage.

With an ATM of 1600kg, you get a load capacity of 650kg with the XFS, which is very good. But, as I mentioned earlier, you’ll need to travel with a few plastic tubs in the interior for cooking utensils, some food, clothing and so on.

Nonetheless, the Overland XFS remains a pretty well set up camper for those seeking the camper trailer lifestyle but unwilling to compromise on their daily drive.