When I turned up at Emu Camper Trailers in Queensland to meet proprietors Rhys and Liz Jones, I was a little taken aback when Rhys said he’d designed his first camper trailer in 1969. In those days, most of us enjoying the camping lifestyle were either sleeping in a canvas tent or, the better-off folk, in a caravan.

Camper trailers, as we know them, were harder to find and, indeed, the Jones’ camper looked more like a roof-top tent on a tall trailer. But that experience must have been a good learning one for Rhys, especially in building budget campers, just like those now available from Emu Camper Trailers. The company offers everything from on-road campers to track-ready rigs. For this review, we checked out the company’s mid-range Emu Off Road in its base specifications.

The Off Road is a side-fold, softfloor camper that comes with an awning and annexe that Emu calls its ‘Homestead 18 Quick Erect’. Two people can use the camper trailer quite easily and it will certainly accommodate a family of four without too much problem, even without the optional ‘sleep out’ that attaches to the open side of the main tent. 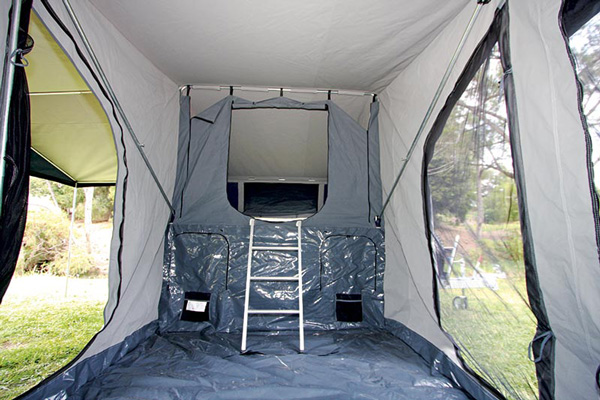 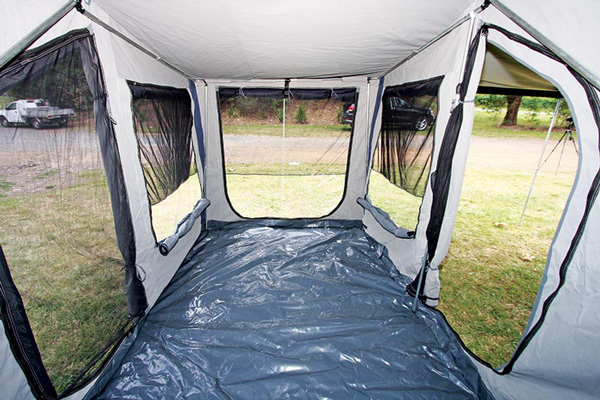 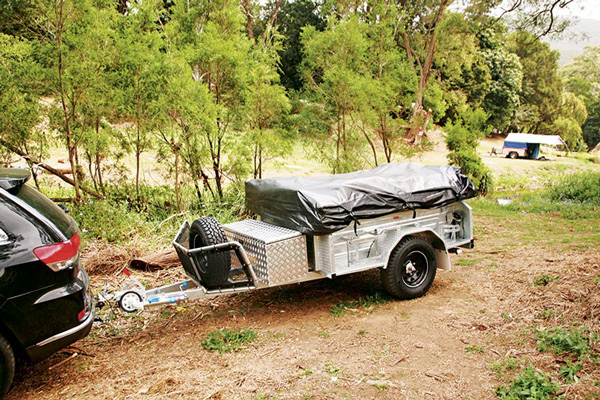 Construction of the box trailer body is quite simple. It has a sideways hinged tailgate and checkerplate mudguards. Infills are used on either side of the mudguards, the front ones being used for jerry can holders and the rear ones for 4.5kg gas cylinder holders.

With the trailer parked, setting up the Off Road tent pretty much follows the same procedure as any side-fold camper. All the canvas is a 15.5oz ‘tight weave’ that the Emu team reckons works really well. After taking the cover off, it’s a matter of dragging the canvas over, extending the internal spreaders and bows and putting in the floor poles. Just how quickly that happens depends on the weather – it was a windy day during our set up, which slowed things somewhat. I suspect it would have been helpful to have pegged the floor out first, before we did anything else.

That same wind was more of an issue with the awning. Emu has designed its Homestead 18 to be quick erecting, even by one person, but that was certainly not the case on this occasion. Given the pole and spreader bar structure, the awning would stand erected without any poles and ropes but not on a windy day, that’s for sure! The awning comes with walls that have large screened windows with flaps on either side but we didn’t use them for our photoshoot. Emu uses zips and hook and loop fasteners to hold everything together.

Once the tent is erected, one of the more noticeable features is the Solar Sun Cover. It stands higher than most tropical roof designs and allows for a much greater airflow across the tent roof.

All the tent windows have insect screens and canvas covers, which can be rolled up or pegged out. The exception us the window above the trailer nearside which has side panels, making it more of an all-weather item. Screened doors are fitted on both sides of the tent adjacent to the trailer, with the remaining walls having large screened windows to provide plenty of fresh air.

At first glance, the stainless steel ‘Deluxe’ kitchen bench looks a bit basic but it has been designed with all the essentials including a sink, drawers and extension flap and manually operated tap. That leaves fitting item like a cooktop/stove up to you and your budget.

In the weight department, the Off Road comes in with a Tare of 600kg as displayed and with an ATM of 1300kg, which gives plenty of load capacity to fill the capacious trailer and front storage box. Keep in mind, lightweight travel is always best and you’ll need to allow about 50kg for a generator and fuel if you plan to use the optional gen-set storage box shown.

I suspect some of that design experience that Rhys gained in 1969 has made its way to 2015 with this Off Road camper. In its base form, the Off Road does look a little basic. However, even like that, it is still a very liveable camper trailer. Emu has a very lengthy options list, which means you can get your camper trailer how you desire and with your budget.

The Off Road comes with an extensive tent and awning area, which on a still day looks easy to set up and makes for a very pleasant base camp for a day or two or a week or three!