The first word that springs to mind upon looking at the Conqueror UEV-345 is 'army'. This unique camper trailer is inspired by the parent company's military background, a fact that is made evident by its bold green aesthetics.

Visually it screams 'I can go anywhere!', and it truly can. It has been specifically designed as a lightweight, entry-level unit that is easily towable by mid-size vehicles. The 345 - affectionately dubbed 'a quarter to four' - weighs only 550kg tare, yet has the capacity of many trailers more than twice its weight.

As with the entire Conqueror range, the UEV-345 is different to anything else in its class. It is packed full of interesting features, accessories and ideas, not to mention a huge amount of storage relative to its size. 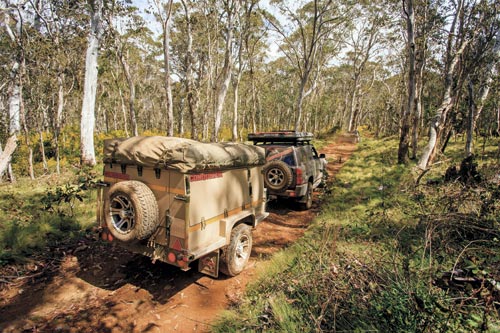 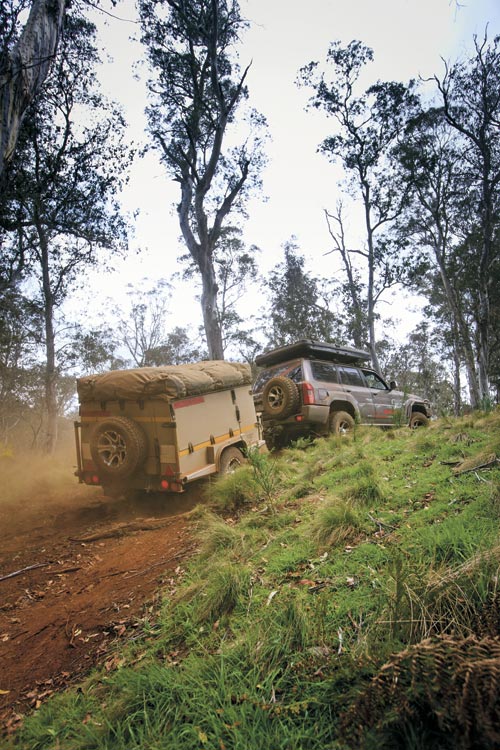 It's fitted with a specially designed softfloor tent that opens easily to reveal a massive king size bed. As you open the 2.1x2.2m tent the side walls and floor naturally fall to the ground because of the height of the trailer. You then attach the ladder, climb up, fold out the bed and hey presto; you've got room to move. Conqueror uses a military grade ripstop canvas which is called 8oz, however in relative terms to Australian ratings is probably equivalent to around 12oz. It retains its military flavour with its olive green colour. There are tropical roofs over all the windows that can be operated from inside by pull cords, while the tent floor is PVC and there's a shade cloth-type floor for the awnings. You can set up the basics in less than five minutes, and it takes around 15 minutes to put up all the additional awnings and wind down the rear stabilisers.

The kitchen pantry is accessed through the driver's side doors, where you'll also find a fold-down bench. The canvas utensils holder is behind the side door, while a separate fold-out table lives inside the trailer with its own restraints - very handy.

Conqueror knows how to get your attention; this thing even has a full bar! You get glasses, plates and even cutlery - including steak knives - and the big 74L stainless steel National Luna fridge/freezer can be accessed at all times and is included in the $24,990 purchase price.

A great deal of thought is put into storage across all Conqueror models, so it comes as no surprise that the UEV-345 has it in spades. There's 10 plastic ammunition crates fitted around the body, which are included in the price. They are big enough to fit all sorts of gear and each has a matching slide to fit right into position, keeping everything safe and secure.

Internally, a massive storage compartment is large enough for a small inflatable boat and outboard motor, and perhaps even a generator. There's storage everywhere, but you'll need to sort yourself out for a cooker. This is not a huge drama as it's easy enough to bring along your own choice of portable stove or barbecue, or even cook on an open fire. Conqueror leaves that up to you.

Up front is a large nose cone toolbox that also houses the electronics centre and the water pump. The water tank fillers are easily accessible on top. Beside the nose cone there are jerry can holders, and behind that we find a mounted axe and shovel. Conqueror even includes a fire extinguisher in the kit.

Offroad is where the Conqueror UEV-345 really shines. Its lightweight, minimal dimensions, seven leaf springs and 45mm solid axle combine with 10in electric brakes and a very strong monocoque chassis to create an offroad masterpiece. At just 3.45m long and 1.72m wide, it's short and narrow and easily capable of following your tow vehicle anywhere.

We put these campers through a tight, tree-lined crossing and the Conqueror's performance was nothing less than awesome. Its angled sides and 1.58m height meant articulation was no problem even with low hanging branches, deep cuttings, mud, slop and cranky inclines.

From the Treg hitch back, the drawbar is constructed of 100x50mm rolled galvanised C-section, and this same hot dipped steel flows through into the chassis. The rest of the main body is 1.5mm electroplated, powder-coated folded steel, and all bolts are fastened with Nyloc nuts and Loctite.

The bushability factor is surprising. There are twin 75L poly water tanks with a 12L/m Shurflo electric pump, a single 105Ah Deka battery charged via the Anderson plug running four 12V power sockets, LED lighting with switches to vary the light output, fuse board with circuit breakers and 240V power.

All in all the Conqueror UEV-345 is one hell of an offroad camper trailer. It's tough, practical, cost effective and, above all, rugged. You can sleep easy in the knowledge that this hardy rig will go anywhere and bring you home again in one piece. Some of us wondered if the green paint would clash with our favourite pants, but overall the judges were all on the same page; we loved it.

STUART JONES: Light, capable, well-equipped with cavernous storage and shelter, the UEV-345 is a great little escape machine. Perfect for smaller engine trucks, the offroader professes strong 'bushability' for its class including 150L water carrying capacity, two jerries, a 105Ah battery, an Anderson plug, and solar as an option. For me, weight plays a big part in the 'offroadability' of a trailer, and being just 550kg with its narrow wheel base the UEV-345 is well underway in the dirt.

NICK MANNELL: The Conqueror UEV-345 is a seriously tough trailer. Its light 550kg tare and narrow profile make it one of the best offroad performers in our line-up for 2013. A lot is bundled in its asking price including cutlery and crockery for six, ratchet straps, tie down points, a mini bar, jerry cans and gas bottles - although I am surprised to see there's no stove. Storage is great and so are the food preparation areas. Setting up the awning is easy, with only two poles to adjust.

ANITA PAVEY: The Conqueror UEV-345 is built tough and made smaller for better 'offroadability'. The many inclusions in the kitchen make it great for people who are new to camping. The pantry is well set up with 10 ammo boxes, but there's no cooker. This camper is super easy to set up. It's just a matter of folding it over and setting the windows in place with elastic cords. The UEV-345's performance offroad was extremely impressive.

MIKE PAVEY: Families upgrading from a tent will barely recognise themselves in the Conqueror UEV-345. It comes with a king size bed and the storage is hard to beat - you've got excellent access to everything. It's easy to erect, too. It comes supplied with two 75L water tanks, a 105Ah battery, two jerry cans, an Anderson plug and a 30A, 240V charger. The UEV-345 has a robust construction and its compact length and good clearances make it an agile performer. The suspension performed well on our test, navigating undulating and rocky terrain without losing contact with the ground. This is a rig you can really trust offroad.

JOHN 'BEAR' WILLIS: The Conqueror UEV-345 is very versatile camper with plenty of features and loads of quirky extras. It has a real point of difference, and I loved it. The UEV looks like a Transformer, and is laden with innovative design ideas that work. It's light, strong and easy to tow, with plenty of creature comforts and good water capacity - perfect for when you're travelling offroad. The UEV did really well in the rough stuff; it cleared every obstacle like it hadn't even noticed. The storage capability is unbelievable, and assembly is quite easy considering the tent's height from the ground.

JUDGE'S PICK, MIKE PAVEY: For me, camper trailers are most comfortable when they have organised storage space so you can get to what you need without pulling out half your cargo. On this front, few offer the same flexibility as Conqueror; the UEV-345 had racked storage boxes accessible from the rear and sides of the trailer. Even crockery and cutlery (supplied) had their own dedicated storage. Basic comforts haven't been forgotten, either. Up top, the king bed provides plenty of real estate, with room to stretch out in the tropical zones away from other hot bodies. Great ventilation is another big tick. The Conqueror not only looks purposeful but has the hardware to deliver on that expectation.