Tired of towing? Wedgetail Campers hold true to their tradition of camping convenience and precision finish with their ute-mounted WTC slide-on.

How do you become a camper manufacturer? For some it’s a long, slow and trauma-riddled path from making your first, finding a buyer, then moving on to your second, third and so on, as you build up a name and a reputation — attending shows, watching your bank account evaporate, and wondering where the next dollar is going to come from.

Then, very rarely, you’re in the right place at the right time, and you grasp an opportunity and there it is, all finished and pristine and travelling along as fast as you can build your product.

For Darren Houston, a young electrician from the central NSW coastal city of Newcastle, that’s how he became the scion of the leading brand of slide-on camper on the Aussie market. 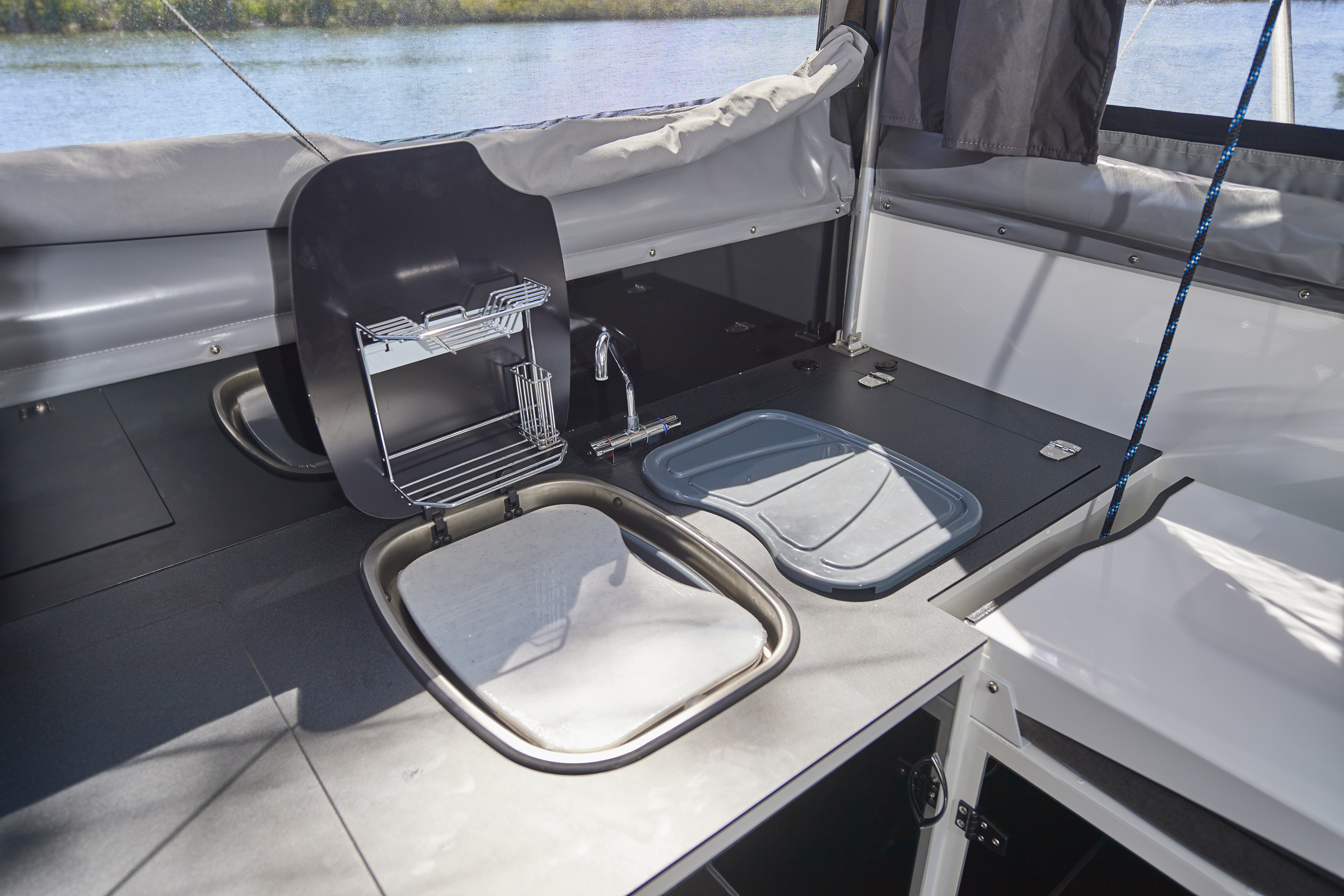 Wedgetail Campers had been through all those furtive, faltering stages a decade earlier, the first camper selling in 2009. The man behind it all, David Hazelwood, rapidly built his concept into an award-winning design that had local waiting lists of up to two years and unfortunately ignored international enquiries dribbling in. It was all at premium prices for a very premium camper.

But Wedgetail was, in many ways, an accidental success. It was originally designed to be an answer to David Hazelwood’s desire for a base to go camping with, to enable his love of nature photography, and as his mid-60s approached he began to harbour a desire to take this great camper he’d developed and simply disappear into the bush, where he’d wanted to go over 10 years earlier, and live that dream. So what to do with his baby?

On the edges of his world was this young electrician. Over the years Houston had wired up about twenty of those campers for the company, and in fact when Houston got married he had Hazelwood do the photographic record in exchange for the labour of wiring up five of them.

Houston had gone on to build a successful business in Newcastle but found the work of dealing with many employees and subbies very demanding and in 2018 had sold out to seek a less stressed life with his new family.

He approached Hazelwood over an advertised job vacancy at Wedgetail and instead was offered the alternative of buying the business.

Suddenly Houston was the owner of a premium brand of campers with a well established market and brand.

But though he came from a new background, Houston had been camping plenty of times — though in tents — and brought to the mix some new ideas on how to market these products. Hazelwood had essentially offered a basic camper and lots of options, and most customers just went down the list ticking all or most of the options, but Houston has begun by offering three models, plus options.

The base, or W model, gets the lightweight aluminium structure and welded frame (welded by Houston’s brother Tony, as it always has been), and the bonded skin with propeller plate locker doors. The tray size requirements are the same through all models: 2100 x 1800mm. You get the natty concertina Glow Step entry stairs with handrail and awning cover. The canvas is 8oz Australian Coolabah in two-tone grey, with midge mesh to all windows but without a tropical roof; the body paint is in chip and scratch-resistant white with polished alloy lockable doors.

The water storage is 90 litres with a 3.5L/min pump and two cold water outlets, gas storage is in a lockable cupboard, and electrical storage is in a 105Ah AGM battery with a 40A DC-DC charger. The external kitchen has a two-burner butane cooker and there’s a 550 x 550 x 800mm space for a fridge or Esky. Internal bench tops are in compressed laminate in Bespeckled Grey and the internal eatery has two fold-away seats and a collapsible table. There is 360 degrees of windows around the tent to capture any breeze and fill the interior with light around the queen-sized foam mattress.

There are seven storage areas, five with inside/outside access, and 650L of internal storage plus a 260L rear storage pod. The four optional loading legs to lift the camper clear of the vehicle are manually operated and there is a braked ratchet winch to open and close the roof and the pod. All this is priced at $48,990.

The mid-range WT model adds to this with the canvas being upgraded to 10.9oz Billabong, with a choice of the new grey or the traditional Wedgetail colours of beige and khaki, with a tropical roof covering the bed and living area of the tent. The body and door colours are opened to a range of white, two different silvers or black. There are four different compressed laminate colours for the internal benches (Bespeckled Grey, as pictured; Manganese [black]; Stone [dark egg shell]; or Mortar [cream]). The flooring is available in a choice of timber grained or speckled grey vinyl.

You get a Truma gas/240V hot water system, three hot and cold water outlets, two 4kg gas bottles with copper gas lines to the hot water system and an external outlet for a gas barbecue. The external kitchen has storage tubs, a swing-away three-in-one barbecue and Wedgetail’s unique pivot and slide-out fridge with an 85L EvaKool fridge freezer. There’s a lithium upgrade option for the battery and a dual 240V outlet.

Internal lighting includes an LED dual-colour anti-insect light and external LED light over the kitchen plus a light for the internal ensuite (with external shower outlet) and a Thetford porta-potti (stored behind the vinyl rear wall of the ensuite). The bed is upgraded to a reduced thickness innerspring mattress with a dust and moisture proof vinyl cover to retain and protect the bedding. There’s internal shelving and organisation and storage fittings in the rear pod along with a quietly functioning winch for the camper opening. For the added features the price goes up to $64,990.

The top of the range WTC model adds an extended tropical roof that covers right to the back of the ensuite and entry area, an increase in the water pump capacity to 12.5L/min, a plumbed internal two-burner cooker, a 240V external mains charger and a 200 watt removable solar panel on the roof, a 200Ah lithium battery, a dual USB charging point, two bed reading lights and a dual-colour external LED light at the kitchen, a Truma space heater, 10mm Hydrovent underlay for the bed and electric wireless control legs. For all of this the price is $77,990.

The Wedgetail retains, through all models, its roomy, bright and airy internal living space, with walk-up side bench access for the bed, internal access to the fridge, and a capacity to capture any breeze that’s blowing from any direction.

To the WTC model, with its 240V outlets, has been added a rear exhaust collar for an outlet for a portable air conditioner system, with condensate feeding to the ensuite to be captured by the 35L grey water tank.

The fold-over top forms a roof above the kitchen area, and there is a 2000 x 2500mm awning which can form an external wall or become an extended living space next to the kitchen. Optional wall kits make this a very useful area.

Set-up time remains at around eight minutes with pack-up at around 10 minutes, pretty good by any measure. The body of the camper is pressure sealed to keep out all signs of dust. You also have full access to the external kitchen and fridge with the camper closed, and many of the storage spaces via external locker doors.

The camper’s Tare weight is 420kg in basic format but increases with added features up to 710kg with the WTC model. You will require a GVM upgrade for the vehicle.

The only shortfall that we can see is that the fridge remains a little high above the ground. This could be solved by a drop-down mount but this would reduce the size of the fridge drastically. Or else you must use a step.

David Hazelwood found after a while that he no longer needed to attend too many shows; he always had more orders than he could accommodate. Houston has found the same and has attended just four since taking over last December.

His alternative has been to introduce a system where anyone who has to travel over 300km to see him at his factory at Broadmeadow in suburban Newcastle (for a booked tour through the factory and campers) will receive a $200 cash-in-hand rebate on walking in the door. And if you place an order he’ll double that to $400.

“That’s more cost- and time-effective than travelling to shows, which I basically feel are just too expensive,” he says.

The company’s trailer version of the Wedgetail — effectively the slide-on on a trailer — is still also available.

Wedgetail also offers its custom tray beds for Ford Ranger, Mazda BT-50, Toyota HiLux, Isuzu D-Max, and Nissan Navara in single or space cab versions and LandCruiser single cabs. These are lighter, stronger and lower in profile than any of the factory options, and some come with under-bed storage pods and a utility drawer.

WHAT’S NEXT FOR WEDGIE?

It’s been quite a steep learning curve for Darren Houston, but he seems to be handling it with flair and competence.

“I enjoy building things and take pride in a well-finished product,” Houston told us. “I don’t have any dreams of a Jayco-like empire, but I would like to expand the business to meet the market demand, especially in Australia, and then maybe from some of the enquiries we receive from overseas.”

FOR THE DUAL CAB USERS

For slide-ons, dual cabs present unique problems, in that the extended body reduces available space behind for carrying a camper. Nonetheless, Darren Houston has begun work on a dual cab version of the Wedgetail.

This results in some compromises, with the fridge box reduced in size, which limits the fridge size to around 40-50 litres. The water tank size is reduced to around 40 litres and there’s no internal gas bottle storage at this stage of developments, but it is hoped that as the design is refined it will be available elsewhere.Also there is no ensuite option — for now — and the rear storage pod is gone in the interests of reducing rear weight.

At the moment it is hoped that it will be suitable for use on Ford Ranger, Mazda BT-50, Isuzu D-MAX and Toyota HiLux models, with maybe more possible as things evolve.

The Wedgetail is a uniquely top-end piece of gear in the slide-on market. It isn’t cheap, but you get what you pay for. The detailing (far in excess of what we have room to write about here) and the engineering are first class. It has surprising internal room and is as well-equipped as you could ask for. Highly recommended if you have the budget.